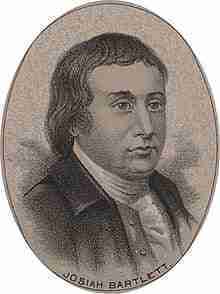 Josiah Bartlett (November 21, 1729 – May 19, 1795) was an American physician and statesman, delegate to the Continental Congress for New Hampshire and signatory of the Declaration of Independence. He was later Chief Justice of the New Hampshire Superior Court of Judicature and Governor of the state.

Josiah Bartlett was born in Amesbury, Massachusetts, to Stephen and Hannah-Mary (Webster) Bartlett. His father Stephen was the son of Richard and Hannah (Emery) Bartlett. He was their fifth child and fourth son. By age 17, he had learned some of both Latin and Greek. He also began the study of medicine, working in the office of Dr. Ordway of Amesbury at the same time. Before Bartlett turned 21, in 1750, he moved to Kingston, New Hampshire, in Rockingham County, and began his practice.

Kingston at that time was a frontier settlement of only a few hundred families, and Bartlett was the only doctor in that part of the county at the time. He purchased land and a farm.

Bartlett became active in the political affairs of Kingston, and in 1765 he was elected to the colonial assembly. In 1767 he became the colonel of his county’s militia and Governor John Wentworth appointed him justice of the peace. As the Revolution neared, his Whig policies brought him into opposition with the Royal Governor, John Wentworth.

In 1774, Bartlett joined the Assembly’s Committee of Correspondence and began his work with the revolutionary leaders of the other 12 colonies. Later that year, when Wentworth dismissed, or prorogued, the Assembly, Josiah was elected to its revolutionary (and illegal) successor, the Provincial Assembly. He also suffered the loss of his home by fire, alleged to have been set by opposition Tories. He moved his family out to the farmhouse and began rebuilding immediately. When the assembly appointed Bartlett and John Pickering as delegates to the Continental Congress, he declined because he wished to attend to his family, but remained active in New Hampshire’s affairs. In one of Governor Wentworth’s last acts before being expelled from New Hampshire in 1775, he revoked Bartlett’s commissions as Justice, Militia Colonel, and Assemblyman.

Bartlett was selected as a delegate again in 1775, and attended that session as well as the meetings in 1776. Indeed, for a time in late 1775 and early 1776 he was the only delegate attending from New Hampshire. Much of the work of the Congress was carried out in Committees. The most important of these had a delegate from each state, which meant that Bartlett served on all of them, including those of Safety, Secrecy, Munitions, Marine, and Civil Government.

Eventually, after his continued letters home to the Assembly and Committee of Safety in New Hampshire, William Whipple and Matthew Thornton were added to the delegation in Philadelphia. When the question of declaring independence from Great Britain was officially brought up in 1776, as a representative of the northernmost colony Bartlett was the first to be asked, and answered in the affirmative. On August 2, 1776, when delegates signed the formal copy of the Declaration of Independence, his position made him the second to sign, just after John Hancock, the president of the Congress.

In 1777, he declined a return to the congress, citing fatigue due to earlier efforts. But when trouble threatened, he used his medical skills and accompanied John Stark’s forces to the Battle of Bennington in August.

He was re-elected to Congress in 1778, and served on the committee that drafted the Articles of Confederation. But, after the articles were adopted, he returned to New Hampshire to attend to personal business. This was the last of his federal service. While he was at the Congress in 1776, his wife Mary had managed the farm, seen to the completion of rebuilding their house, cared for nine children, and given birth to Hannah.

Although he remained in the state after 1778, in 1779 he returned to his role as a judge, serving in the Court of Common Pleas. Then in 1782 he was appointed to the New Hampshire Supreme Court despite not being a lawyer.

In 1788, Bartlett was made the Chief Justice of the state supreme court. That same year he was a delegate to the New Hampshire convention for adoption of the Constitution, serving part of the time as its Chairman. He argued for ratification, which finally took place on June 21, 1788. The legislature of the new State of New Hampshire selected him to be a U. S. Senator, but he declined the office.

In 1790 Bartlett secured legislation recognizing the New Hampshire Medical Society. He was also elected chief executive of New Hampshire. He served in 1791 and 1792 as President. Then when the new State Constitution took effect in 1792 he continued, now as governor. He resigned in 1794 after four years because of declining health; he died the next year.

During his tenure, he oversaw the installation of a new state constitution, compilation of the laws and statutes in force, and provision for the early payment of the State’s debt. He actively promoted agriculture and manufacturing, the improvement of roads, and saw the start of projects to build canals.

Bartlett actively practiced medicine for 45 years, after having apprenticed with another doctor and then establishing his own practice at the age of 20.

Around 1735, the area around Kingston suffered an epidemic of a fever and canker called throat distemper. For adults it was a serious illness, and for children it was frequently fatal, especially among the very young. When the illness struck again in 1754, Bartlett experimented with therapy using several available drugs, and empirically discovered that Peruvian Bark would relieve symptoms long enough to allow recovery.

Bartlett founded and was the first president of the New Hampshire Medical Society. In 1790, he delivered the commencement address at Dartmouth College when his son Ezra graduated. Though the honor was in part due to his signing of the Declaration of Independence and his new selection as President of New Hampshire, it was in large measure a recognition of his medical career. Josiah Bartlett was awarded an honorary M.D. (Doctor of Medicine) the same day his son was awarded the same degree.

He retired to his home in Kingston and died there on May 19, 1795. He is buried next to his wife Mary in the Plains Cemetery, also at Kingston. Relatives of Bartlett still live in his home and give tours throughout the year. A bronze statue of Bartlett stands in the town square of Amesbury, Massachusetts. His portrait hangs in the State House in Concord, New Hampshire, drawn from an original by Jonathan Trumbull. Bartlett, New Hampshire, a town just north of Conway, is named in his honor, and the Josiah Bartlett Elementary School is a visible presence on its major roadway.

The fictional U.S. president on The West Wing, a popular NBC television drama series, is named “Josiah Bartlet”. Despite the spelling difference, the character (played by Martin Sheen), who is also a former governor and Congressman from New Hampshire, is a fictional direct descendant of the New Hampshire signer of the Declaration of Independence.

A “Dr. Josiah Bartlet” was also referred to (as a historical Boston medical practitioner) in a 1986 episode of the hospital drama series St. Elsewhere.