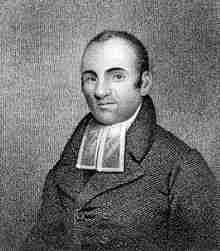 Lemuel Haynes (1753–1833) was an influential African-American religious leader who argued against slavery.

Little is known of his early life. He was born in West Hartford, Connecticut, to a reportedly Caucasian mother of some status and a man named Haynes, who was said to be “of some form of African extraction”. According to the African American National Biography, his birth date is 18 July 1753 and he died the 28 September 1833.

At the age of five months, Lemuel Haynes was given over to indentured servitude in Granville, Massachusetts. Although serving as an agricultural worker, part of the agreement required educating him. Through accompanying his masters to church, he became exposed to Calvinistic thought. At about twenty years of age, he saw the Aurora Borealis, and, fearing the approach of the Day of Judgment as a result, he soon accepted Christianity.

Freed in 1774 when his indenture expired, Haynes joined the minutemen of Granville. In 1775, he marched with his militia company to Roxbury, Massachusetts, following the news of the Battles of Lexington and Concord. In 1776, he accompanied them in the garrisoning of the recently captured Fort Ticonderoga. He returned to his previous labors in Granville after the northern campaign of the American War of Independence.

After the American Revolution, Haynes began to write extensively, criticizing the slave trade and slavery. He also began to prepare sermons for family prayers and write theologically about life. The Scripture, abolitionism, and republicanism impacted his published writings. Haynes argued that slavery denied black people their natural rights to “Life, Liberty and the pursuit of happiness”. Paralleling the recent American experience with oppression to the slave experience, Haynes wrote: “Liberty is equally as precious to a black man, as it is to a white one, and bondage as equally as intolerable to the one as it is to the other”.

By the 1780s, Haynes became a leading Calvinist minister in Vermont. His contemporary white republican and abolitionist thinkers saw slavery as a liability to the new country, but most argued for eventual slave expatriation to Africa. The American Colonization Society (founded in 1817) was one such group. Included among its supporters were people such as James Madison, James Monroe, Henry Clay and Daniel Webster. In contrast, Haynes continued to passionately argue along Calvinist lines that God’s providential plan would defeat slavery and lead to the harmonious integration of the races as equals.

As the first black person in America to serve as pastor of a white congregation, Haynes ministered to Rutland’s West Parish for thirty years starting in 1783. Middlebury College granted Haynes an honorary master of arts in 1804, the first advanced degree ever bestowed upon an African American.

Historian John Saillant (2003, p. 3) writes that Haynes’s “faith and social views are better documented than those of any African American born before the luminaries of the mid-nineteenth century.”

Lemuel Haynes House, his home for the last 11 years of his life in South Granville, New York, when he was pastor of South Granville Congregational Church was declared a National Historic Landmark in 1975. Originally sitting on a parcel of the PAR Farm, it was purchased from Charles Halderman in 2009 by Bo Young and William Foote, formerly of Brooklyn.