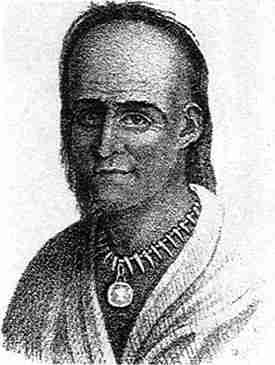 Little Turtle, or Mishikinaakwa (in Miami-Illinois) (c. 1747 – July 14, 1812), was a chief of the Miami people, and one of the most famous Native American military leaders of his time. He led his followers in several major victories against United States forces in the 1790s during the Northwest Indian Wars, also called Little Turtle’s War. In 1791, they defeated General St. Clair, who lost 600 men, the most decisive loss by the US against Native American forces ever.

There is little documentary evidence for most of Little Turtle’s life, and the exact year and place of his birth are uncertain. He was born just before or just after the period that his parents lived in the Miami village of Pickawillany, known to be from 1747 to 1752. Some historians give 1752 as his probable date of birth; others prefer 1747. He was born in what is now Whitley County, Indiana, at either a small Miami village by Devil’s Lake, or at a larger nearby village known as Turtletown.

Little Turtle emerged as a war chief by defeating the French military adventurer Augustin de La Balme. In October 1780, La Balme plundered the principal Miami village of Kekionga (present-day Fort Wayne), as part of his campaign to attack the British in Detroit. On 5 November 1780, Little Turtle led an attack on La Balme’s camp along the Eel River, killing La Balme and 30 of his men and bringing an end to the campaign. The victory established Little Turtle’s reputation as a war leader, and through the 1780s, he led raids against colonial American settlements in Kentucky, fighting on the side of the British. The Miami were not unified in support of the British, however: the Piankashaw Miami supported the rebel Americans, while the Wea Miami vacillated.

In the Treaty of Paris (1783) which ended the American Revolutionary War, the British abandoned their native allies and ceded the land between the Appalachian Mountains and the Mississippi River to the United States. The Americans considered the region to be theirs by right of conquest. Through the creation of the Northwest Territory in 1787, they began to divide the land north of the Ohio River for settlement. Native Americans living in the territory resisted and violence escalated; Native Americans formed the Western Confederacy with the goal of keeping the Ohio River as a boundary between Indian lands and the United States. Little Turtle emerged as one of the leaders of this confederacy, which included the Shawnee under Blue Jacket and the Delaware under Buckongahelas. The war which followed has become known by historians as the Northwest Indian War, but it was once known as “Little Turtle’s War”.

In 1790, the United States sent an expedition under the command of General Josiah Harmar to end the border war. Because the United States had mostly disbanded its military after the Revolution, it had few professional soldiers to send into battle, a weakness which Little Turtle and other native leaders fully exploited. In October 1790, Little Turtle and Blue Jacket won two victories against Harmar’s men. These successes encouraged previously reluctant leaders among the Ottawa and Wyandot to join the confederacy.

In 1791, Little Turtle and Blue Jacket led 1,000 warriors and defeated another American expedition, this time led by General Arthur St. Clair. It was the worst defeat the Americans would ever suffer at the hands of American Indians, 623 soldiers were killed and another 258 wounded. According to the most popular version of the story, Little Turtle was in overall command of the army that defeated St. Clair, although other accounts suggest that Blue Jacket was the preeminent native leader.

General Anthony Wayne commanded a third expedition in the Northwest; his U.S. troops were of superior numbers and had just completed rigorous training. After an exploratory attack on Fort Recovery in June 1794, Little Turtle counseled negotiation rather than battle, remarking that Wayne “never sleeps.” According to a widely circulated story, he ceded command to Blue Jacket, although retaining leadership of the Miami tribesmen. Little Turtle’s son-in-law, William Wells, switched sides and served as a scout for the Legion of the United States. The confederacy, numbering around 1,000 men, was defeated at the Battle of Fallen Timbers. This battle forced the confederacy to sign the Treaty of Greenville.

Little Turtle continuously advised cooperation with the U.S., refusing an alliance with the Shawnee chief Tecumseh. In 1797, he met cordially with George Washington, who presented him with a ceremonial sword. On this trip he also met Comte de Volney. He also met presidents John Adams and Thomas Jefferson. He and Jefferson discussed the need to introduce American agriculture to Miami society, although it was the Quaker society of Baltimore who finally sent Philip Dennis to demonstrate East Coast farming methods.

One story says that on his way to Philadelphia to meet Washington, Little Turtle met General Tadeusz Kościuszko, who presented him with a matching pair of pistols along with instructions to use them on “the first man who ever comes to subjugate you.”

In 1809, Little Turtle suffered a break with other Miami leaders when Governor William Henry Harrison came to Fort Wayne to renegotiate treaty terms. Little Turtle admitted Potawatomi representatives to the treaty and cooperated with Harrison, but other chiefs, including his brother Pacanne and his nephew Jean Baptiste Richardville, Owl, and Metocina refused to sell any more land. Harrison was forced to recognize the Mississinewa chiefs as the true representatives of the Miami, and to declare that Little Turtle was not a Miami.

Little Turtle retired to a spot near present-day Columbia City, Indiana. After the Siege of Fort Wayne in the War of 1812, General William Henry Harrison ordered the destruction of all Miami villages within a two-day march of Fort Wayne. This may have been in retaliation for the negotiations in 1809, but his forces also destroyed the village of Little Turtle.

Little Turtle died in 1812, at the home of his son-in-law William Wells (soldier), not far from Kekionga. He had been suffering from gout and rheumatism for some time.

* Little Turtle was honored with a military-style funeral at Fort Wayne. He was buried in his ancestral burial ground near Spy Run.

In 1912 his grave was accidentally disturbed during a construction excavation. The sword and other artifacts buried with him were placed with the Allen County-Fort Wayne Historical Society, and his remains were reinterred. The site had been accidentally discovered by a homebuilder on Lawton Place in Fort Wayne, and the plans for the house were altered.

* A small memorial stone was placed there, which reads:

This site honors the great Chief of the Miamis, Meshekinoqua, “The Little Turtle,” son of the great Chief Acquenacque. He is held in the hearts of his people, allies, and foes with the greatest of honor and respect for his courageous valor and peacemaking.

* In 1959, the site was purchased by the Smeltzly sisters of Fort Wayne, to hold up Little Turtle’s peacemaking efforts “as an example to future generations.” They donated the land to the city as a public park “dedicated to the children of America.” In 1994, the memorial was improved with additional markers and a trust established for its maintenance.

Several institutions in northeast Indiana have been named for Little Turtle including Camp Chief Little Turtle (a Boy Scout reservation near Angola), the Little Turtle Branch of the Allen County Public Library, and Turtle Island in Lake Erie.

There is a neighborhood, including a private golf course, named after Little Turtle in Columbus.

There is a street named “Little Turtle Court” in Hamilton, OH.

Lake Erie’s Turtle Island, which sits astride the Michigan and Ohio border, is named for him.