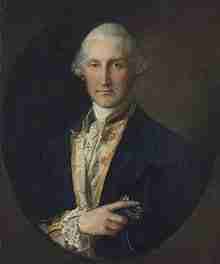 Lord William Campbell (ca. 1731 – 4 September 1778) was from a Scottish family loyal to the British Crown. His father was John Campbell, 4th Duke of Argyll.

From 1752 to 1760, he served in the Royal Navy in India. In 1762, because of the Seven Years’ War, he was scheduled to serve in America. He met and married a lady named Sarah Izard from South Carolina in 1763. His father-in-law was a future American rebel and member of the Second Continental Congress, Ralph Izard. In 1764, they returned to Britain where he became a member of Parliament, representing the family seat in Argyllshire. In 1766 he was appointed Governor of Nova Scotia, a position he held until 1773.

In June 1775, at the outbreak of the American Revolutionary War, Campbell became the last British Governor of South Carolina, a position for which he had lobbied hard, because his wife was from South Carolina.

Charged with bringing in the reins on the colony’s revolutionaries, Campbell first decided to ignore the newly established Provincial Congress. The Provincial Congress was created in January 1775 in Charleston by former members of the South Carolina House of Commons as a separate ruling government independent of British authority and influence. Knowing the great rift between the aristocratic low-country and the backwoodsmen commoners of the backcountry, Campbell distributed pamphlets in mass numbers to backcountry citizens. The pamphlets stated that Charleston citizens kept lying and that the Provincial Congress could not be trusted.

Governor Campbell soon realized he could no longer reside and govern in safety in Charleston. Intimidation from Patriots resulted in public hangings, assaults, and business/home raids of suspected Loyalists. One home raided included that of Henry Laurens, who would go on to become the third President of the Second Continental Congress. Patriots were not afraid to intimidate or attack British officials, and several officials even fled the city to escape further persecution. In September 1775, Campbell fled Charleston on a British warship in September of that same year and returned to England. His departure marked the beginning of revolution in South Carolina and the end of British imperial rule over the colony.

In 1776, during the British attack upon Fort Moultrie, he was wounded by a splinter in the side while aboard Sir Peter Parker’s flagship, HMS Bristol. He never fully recovered, and died of its effects two years later.