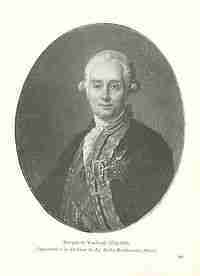 Louis-Philippe was born into a family with a rich political and military tradition. His grandfather, Philippe de Rigaud de Vaudreuil, and his uncle Pierre de Rigaud de Vaudreuil de Cavagnal, were both governors of Canada; the latter was its last governor, surrendering Montreal to the British in 1760. Another uncle, Pierre-François de Rigaud, fought with Montcalm at the Battle of Oswego.

His father, also named Louis-Philippe de Rigaud de Vaudreuil , was a celebrated admiral of the French Navy, and was in charge of the navy in North America in 1747. Louis-Philippe the elder successfully saved Desherbiers de l’Etenduère at the Second battle of Cape Finisterre while commanding the Intrépide. Louis XV himself ordered the celebrated Dutch artist Charles-André van Loo to paint one of his naval battles; this painting is still in the Palace of Versailles.

Vaudreuil was dispatched to America when the French entered the war on the side of the Americans in February 1778. His first engagement came at the First Battle of Ushant, an island on the north-west part of France near Brest, where the French Navy and the British Navy fought to a draw. He was at sea for about 5 months.

Vaudreuil was on the Sceptre in the Battle of the Chesapeake. After one furious engagement with the British Navy, Admiral de Grasse’s fleet and the British fleet drifted for miles south of Yorktown and lost sight of each other. De Grasse eventually disengaged and returned to the Chesapeake, where he met the fleet of the Comte de Barras. This combined fleet outnumbered the British fleet, and gave the French control of the bay when the British opted not to attack. This had the effect of cutting the army of Cornwallis off from resupply and relief, leading to the Siege of Yorktown and his surrender.

Vaudreuil’s contribution to this effort was to provide the cavalry of Duke of Lauzun, a foreign legion that was a mixed lot of Russian, Slavic, Polish and German mercenaries in the service of France. He also provided 800 men from his ship to Gloucester Point in defence of a peninsula near Yorktown. Together with the Duke of Lauzun these men fought the cavalry of Tarleton (made famous by the Mel Gibson movie The Patriot), and defeated him.

In the 1782 Battle of the Saintes, Vaudreuil was credited with saving most of the French Navy’s ships in the disastrous defeat. Since De Grasse was taken prisoner Vaudreuil took command of the entire French fleet in America.

After the Battle of the Saints in 1782, Vaudreuil was on the ship Triumphant in Boston harbour. At the conclusion of the war in 1783, he was responsible for bringing the victorious French army of Rochambeau back to France.