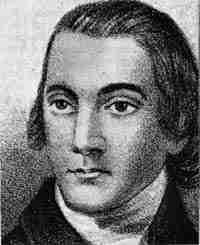 Lyman Hall (April 12, 1724{spaced ndash}October 19, 1790), physician, clergyman, and statesman, was a signer of the United States Declaration of Independence as a representative of Georgia. Hall County is named after him.

Lyman Hall was the son of John Hall and Mary Hall (née Street) Hall and graduated from Yale College in 1747, a tradition his seven siblings would repeat. In 1749, he was called to the pulpit of Stratfield Parish (now Bridgeport, CT). His pastorate was a stormy one: an outspoken group of parishioners opposed his ordination; in 1751, he was dismissed after charges against his moral character which, according to one biography, “were supported by proof and also by his own confession.” He continued to preach for two more years, filling vacant pulpits, while he studied medicine and taught school.

In 1752, he married Abigail Burr of Fairfield, Connecticut, however, she died the following year. In 1757, he was married again to Mary Osborne. He migrated to South Carolina and established himself as a physician at Dorchester, South Carolina, near Charleston, a community settled by Congregationalist migrants from Dorchester, Massachusetts decades earlier. When these settlers moved to the Midway District{spaced ndash}now Liberty County{spaced ndash}in Georgia, Hall accompanied them. He soon became one of the leading citizens of the newly founded town of Sunbury.

On the eve of the American Revolution, St. John’s Parish, in which Sunbury was located, was a hotbed of radical sentiment in a predominantly loyalist colony. Though Georgia was not initially represented in the First Continental Congress, through Hall’s influence, the parish was persuaded to send a delegate{spaced ndash}Hall himself{spaced ndash}to Philadelphia, Pennsylvania, to the Second Continental Congress. He was admitted to a seat in Congress in 1775. He was one of the three Georgians to sign the Declaration of Independence.

In January 1779, Sunbury was burned by the British. Hall’s family fled to the North, where they remained until the British evacuation in 1782. Hall then returned to Georgia, settling in Savannah. In January 1783, he was elected an early governor of the state{spaced ndash}a position that he held for one year. While governor, Hall advocated the chartering of a state university, believing that education, particularly religious education, would result in a more virtuous citizenry. His efforts led to the chartering of the University of Georgia in 1785. At the expiration of his term as governor, he resumed his medical practice.

In 1790, Hall removed to a plantation in Burke County, Georgia, on the Carolina border, where he died on October 19 at the age of 66. Hall’s widow, Mary Osborne, survived him, dying in November 1793.

Signers Monument, a granite obelisk in front of the courthouse in Augusta, Georgia, memorializes Hall and the other two Georgians who signed the Declaration of Independence. His remains were re-interred there from his original grave on his plantation in Burke County.

Lyman Hall is portrayed in the 1969 Broadway musical 1776 and in the 1972 film of the same name by Jonathan Moore. As presented in the play and in the film, at a critical point in the struggle of John Adams to convince his fellow delegates to the Second Continental Congress to choose independence, Hall re-enters the chamber to change Georgia’s vote. He says he has been thinking: “In trying to resolve my dilemma I remembered something I’d once read, ‘that a representative owes the People not only his industry, but his judgment, and he betrays them if he sacrifices it to their opinion.’ It was written by Edmund Burke, a member of the British Parliament.” Hall then walks over to the tally board and changes Georgia’s vote from “Nay” to “Yea.”