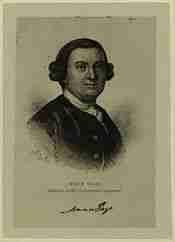 Mann Page (1749–1781) was an American lawyer and planter from Spotsylvania County, Virginia. He was a delegate for Virginia to the Continental Congress in 1777. He was the brother of Virginia Governor John Page.

Mann was the third of that name and is sometimes referred to as Mann Page, III. He was born to Mann Page (II) and Ann Corbin Tayloe (his second wife) on their Rosewell Plantation in Gloucester County, Virginia. Mann was one of the younger of seven children. He attended William and Mary before reading law.

Page moved to Spotsylvania County and established his own plantation, known as Mannsfield near Fredericksburg. He married Mary Tayloe and the couple had three children. Around 1735, Page’s father’s half-sister, Maria Judith Page, married William Randolph, the son of Thomas Randolph (of Tuckahoe) and the grandson of William Randolph I, and had four children.

Page served only one term in the Continental Congress.

Mann Page died at home in 1781, and was buried in the family plot at Mannsfield. The plantation was mostly destroyed during the Battle of Fredericksburg in the Civil War, but a remnant remains in the battlefield park.

The ruins of Rosewell Plantation, the home of early members of the Page family and one of the finest mansions built in the colonies, sit on the banks of the York River in Gloucester County. In 1916, a fire swept the mansion leaving a magnificent shell which is testament to 18th century craftsmanship and dreams, and the site of ongoing archaeological studies.