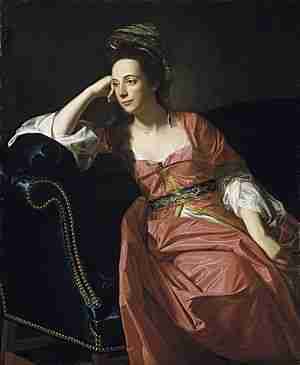 Margaret Kemble Gage (1734–1824) was the wife of General Thomas Gage, who led the British Army during the American Revolutionary War, and is said to have spied against him out of sympathy for the Revolution. She was born in New Brunswick, New Jersey and resided in East Brunswick Township.

Historical texts, most notably Paul Revere’s Ride suggest that Mrs. Gage allegedly provided Joseph Warren with information regarding General Gage’s raid at Lexington and Concord. Although there is no documented evidence that confirms Gage as Warren’s informer, speculation of her being a spy for the patriots remained due to her familial ties to America. Among the skeptics was her husband. Fischer writes in Paul Revere’s Ride, “All of this circumstantial evidence suggests that it is highly probable, though far from certain that Dr. Warren’s informer was indeed Margaret Kemble Gage – a lady of divided loyalties to both her husband and her native land”. As a result, Gage was sent to England aboard the Charming Nancy on her husband’s orders in the summer of 1775.

Margaret Kemble was the great-granddaughter of Mayor of New York City Stephanus Van Cortlandt. She was the daughter of Peter Kemble, a well-to-do New Jersey businessman and politician, and of Gertrude Bayard.She married Thomas on December 8, 1758. Together they had eleven children. Their first son, the future 3rd Viscount Gage, was born in 1761. Gage’s daughter, Charlotte Margaret Gage, married British Admiral Charles Ogle.

Her brother, Stephen Kemble was a Lieutenant-Colonel in the British Army during the Revolution.