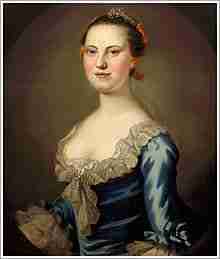 Mary Willing Byrd (September 10, 1740 – March 1814) was the second wife of Colonel William Byrd III, a colonial American military officer at the time of the American Revolution and son of the founder of Richmond, Virginia. Her father, Charles Willing, was the mayor of Philadelphia, Pennsylvania, from 1748 to 1754, and her great-grandfather, Edward Shippen, was the second mayor of Philadelphia from 1701 to 1703.

After her husband committed suicide in January 1777, leaving considerable debts, she managed his plantations, including Westover Plantation, in Charles City County.

Although Byrd had many ties to the British and Loyalists during the American Revolution, she tried to remain neutral and to preserve her children’s inheritance. After trying to recover property that had been seized by the British, she was charged in 1781 with trading with the enemy. Byrd defended herself eloquently in a letter to Governor Thomas Jefferson: “I wish well to all mankind, to America in particular. What am I but an American? All my friends and connexions are in America; my whole property is here—could I wish ill to everything I have an interest in?” Her trial was first postponed and ultimately never held.