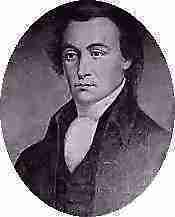 Matthew Thornton (1714 – June 24, 1803), was a signer of the United States Declaration of Independence as a representative of New Hampshire.

Thornton was born in Ireland, the son of James Thornton and Elizabeth Malone. In 1716 Thornton’s family immigrated to North America when he was three years old, settling first at either Williamsburg, Virginia (or alternatively Brunswick, Maine). On July 11, 1722 the community was attacked by Native Americans.). James and Elizabeth Thornton fled from their burning home with Matthew, removing shortly thereafter to Worcester, Massachusetts. Thornton completed studies in medicine at Leicester. He became a physician and established a medical practice in Londonderry, New Hampshire. In New Hampshire he was appointed surgeon to the New Hampshire Militia troops in an expedition against Fortress Louisbourg in 1745. He had royal commissions as justice of the peace and colonel of militia.

In 1760 Thornton married Hannah Jack, and the couple had five children. Thornton became Londonderry Town Selectman, a representative to, and President of the Provincial Assembly, and a member of the Committee of Safety, drafting New Hampshire’s plan of government after dissolution of the royal government, which was the first state constitution adopted after the start of hostilities with England.

He was first President of the New Hampshire House of Representatives and Associate Justice of the Superior Court of New Hampshire. He was elected to the Continental Congress after the debates on independence had occurred, but as he did not arrive in Philadelphia until November, 1776, he was granted permission to actually sign the Declaration of Independence three months after the formal signing in August.

He became a political essayist. He retired from his medical practice and in 1780 moved to Merrimack, New Hampshire where he farmed and operated a ferry with his family. Although he did not attend law school, he was given duties as an associate justice of the New Hampshire Superior Court about 1777. In his latter years he operated a ferry at Thornton’s Ferry. From 1784 to 1787 Thornton was a member of the New Hampshire State Senate and combined this with the role of State Councillor from 1785 to 1786. His wife Hannah died in 1786.

Thornton died in Newburyport, Massachusetts, while visiting his daughter. Matthew Thornton is buried in Thornton Cemetery in Merrimack, and his grave reads “An Honest Man.”

The town of Thornton, New Hampshire is named in his honor, as is a Londonderry elementary school, and Thorntons Ferry School in Merrimack. Thornton’s residence in Derry, which was part of Londonderry at the time, is listed on the National Register of Historic Places. Some of his descendants live in Georgia, Florida, Tennessee, Illinois, Louisiana, Maryland, Mississippi, New Hampshire, New York, North Carolina, Pennsylvania, South Carolina, Texas, California, Arizona, and even Paris, France.

Matthew Thornton, signer of the Declaration of Independence, was the uncle of Matthew Thornton, a suspected Loyalist who was tried for treason related to actions just before the Battle of Bennington in 1777. Although “honorably acquitted” at his trial, he was still thought to be guilty by many and with assistance from his fellow Freemasons escaped to St. Stephen, in Charlotte County, New Brunswick where he was one of the earliest British settlers.

As President of the Provincial Congress, he addressed the following letter to the inhabitants of the Colony of New Hampshire : Exeter, June 2d, 1775.

To the Inhabitants of the Colony of New Hampshire :

Friends and Brethren : You must all be sensible that the affairs of America have at length come to a very affecting and alarming crisis. The Horrors and Distresses of a civil war, which, till of late, we only had in contemplation, we now find ourselves obliged to realize. Painful beyond expression have been those scenes of Blood and Devastation which the barbarous cruelty of British troops have placed before our eyes. Duty to God, to ourselves, to Posterity, enforced by the cries of slaughtered Innocents, have urged us to take up Arms in our Defense. Such a day as this was never before known, either to us or to our fathers. You will give us leave therefore — in whom you have reposed special confidence — as your representative body, to suggest a few things which call for the serious attention of everyone who has the true interest of America at heart. We would therefore recommend to the Colony at large to cultivate that Christian Union, Harmony and tender affection which is the only foundation upon which our invaluable privileges can rest with any security, or our public measures be pursued with the least prospect of success.

We also recommend that a strict and inviolable regard be paid to the wise and judicious councils of the late American Congress, and particularly considering that the experience of almost every day points out to us the danger arising from the collection and movements of bodies of men, who, notwithstanding, we willingly hope would promote the common cause and serve the interest of their country, yet are in danger of pursuing a track which may cross the general plan, and so disconcert those public measures which we view as of the greatest importance. We must, in the most express and urgent terms, recommend it that there may be no movements of this nature, but by the direction of the Committees of the respective Towns or Counties; and those Committees, at the same time, advising with this Congress or with the Committee of Safety in the recess of Congress, where the exigence of the case is not plainly too pressing to leave room for such advice.

We further recommend that the most industrious attention be paid to the cultivation of Lands and American Manufacture, in their various branches, especially the Linen and Woolen ; and that the husbandry might be particularly managed with a view thereto — accordingly that the Farmer raise Flax and increase his flock of sheep to the extent of his ability.

We further recommend a serious and steady regard to the rules of temperance, sobriety and righteousness, and that those Laws which have heretofore been our security and defense from the hand of violence may still answer all their former valuable purposes, though persons of vicious and corrupt minds would willingly take advantage from our present situation.

In a word, we seriously and earnestly recommend the practice of that pure and undefiled religion which embalmed the memory of our pious ancestors, as that alone upon which we can build a solid hope and confidence in the Divine protection and favor, without whose blessing all the measures of safety we have or can propose will end in our shame and disappointment.

President. He was survived by Anna Morris and family.