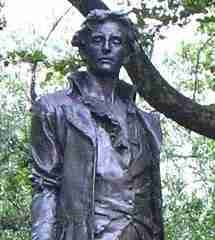 Nathan Hale (June 6, 1755 – September 22, 1776) was a soldier for the Continental Army during the American Revolutionary War. He volunteered for an intelligence-gathering mission in New York City but was captured by the British and hanged. He is probably best remembered for his purported last words before being hanged: “I only regret that I have but one life to give for my country.”{sfn|Crocker| p=57} Hale has long been considered an American hero and, in 1985, he was officially designated the state hero of Connecticut.

Nathan Hale was born in Coventry, Connecticut, in 1755 to Richard Hale and Elizabeth Strong. In 1768, when he was fourteen years old, he was sent with his brother Enoch, who was sixteen, to Yale College. Nathan was a classmate of fellow patriot spy Benjamin Tallmadge. The Hale brothers belonged to the Yale literary fraternity, Linonia, which debated topics in astronomy, mathematics, literature, and the ethics of slavery. Graduating with first-class honors in 1773 at age 18, Nathan became a teacher, first in East Haddam and later in New London.