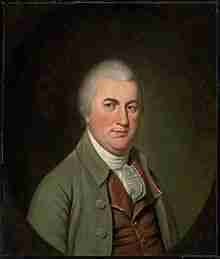 Nathaniel Gorham (May 27, 1738 – June 11, 1796, his first name is sometimes spelled Nathanial) was a politician and merchant from Massachusetts. He was a delegate from Massachusetts to the Continental Congress, and for six months served as the presiding officer of that body. He also attended the Constitutional Convention and was one of the signers of the United States Constitution on September 17, 1787, in Philadelphia, Pennsylvania.

Gorham was born in Boston, Massachusetts, and was the son of Captain Nathaniel Gorham and his father’s wife Mary Soley. He was a descendant of John Howland, (c. 1599–1673) who was one of the Pilgrims who traveled from England to North America on the Mayflower, signed the Mayflower Compact, and helped found the Plymouth Colony.

His sister, Elizabeth Gorham, who married John Leighton, was the ancestor of Edith Kermit Carow Roosevelt the second wife of Theodore Roosevelt who served as First Lady of the United States during his presidency from 1901 to 1909.

Starting at 15, he served an apprenticeship with a merchant in New London, Connecticut, after which he opened a merchant house in Charlestown, Massachusetts, in 1759. He took part in public affairs at the beginning of the American Revolution: he was a member of the Massachusetts General Court (legislature) from 1771 until 1775, a delegate to the Provincial congress from 1774 until 1775, and a member of the Board of War from 1778 until its dissolution in 1781. In 1779 he served in the state constitutional convention. He was a delegate to the Continental Congress from 1782 until 1783, and also from 1785 until 1787, serving as its president for five months from June 6 to November 5, 1786 after the resignation of John Hancock. Gorham also served a term as judge of the Middlesex County, Massachusetts Court of Common Pleas.

For several months in 1787, Gorham served as one of the Massachusetts delegates to the United States Constitutional Convention. Gorham frequently served as Chairman of the Convention’s Committee of the Whole, meaning that he (rather than the President of the Convention, George Washington) presided over convention sessions during the delegates’ first deliberations on the structure of the new government in late May and June 1787. After the convention, he worked hard to see that the Constitution was approved in his home state.

In connection with Oliver Phelps, he purchased from the state of Massachusetts in 1788 pre-emption rights to an immense tract of land in western New York State which straddled the Genesee River, all for the sum of $1,000,000 (about ${Formatprice|{{inflation|US|1000000|1800|r=2}}} today) (the Phelps and Gorham Purchase). The land in question had been previously ceded to Massachusetts from the state of New York under the 1786 Treaty of Hartford. The pre-emption right gave them the first or preemptive right to obtain clear title to this land from the Indians. They soon extinguished the Indian title to the portion of the land east of the Genesee River, as well as a {convert|185,000|acre|km2} tract west of the Genesee, the Mill Yard Tract), surveyed all of it, laid out townships, and sold large parts to speculators and settlers. Nathaniel Gorham, Jr., (died October 22, 1836, Canandaigua, New York) was a pioneer settler of this tract, having been placed in charge of his father’s interests there.

In 1790, after Gorham and Phelps defaulted in payment, they sold nearly all of their unsold lands east of the Genesee to Robert Morris, who eventually resold those lands to The Pulteney Association. Phelps and Gorham were unable to fulfill their contract in full to Massachusetts, so in 1790, they surrendered back to Massachusetts that portion of the lands which remained under the Indian title, namely, the land west of the Genesee. It also was eventually acquired by Robert Morris, who resold most of it to The Holland Land Company. Morris did keep {convert|500,000|acre|km2} for himself, and that land became known as The Morris Reserve.