1. Fry the salt pork out in the pot in which the chowder is to be made
2. Remove fried pork
3. Put into the pot the onions, potatoes and half the salt
4. Cover with hot water and cook until potatoes are tender, but not broken
5. Cut the fish into three pieces, and in a separate dish, simmer it in boiling water to which the remaining ½ tsp. Salt has been added (So that the fish won’t break)
6. Then put: fish and strained fish stock (for flavor) into heated chowder dish. Add milk
7. Butter, and pepper. Season
8. This serves five 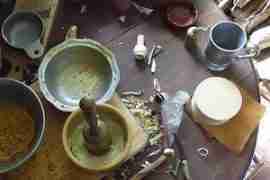