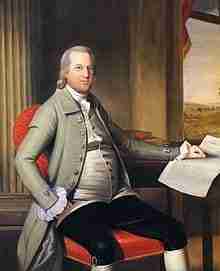 Oliver Wolcott (November 20, 1726{spaced ndash}December 1, 1797) was a signer of the United States Declaration of Independence and also the Articles of Confederation as a representative of Connecticut and the nineteenth Governor of Connecticut.

Wolcott was born in Windsor, Connecticut, the youngest of fourteen children of the colonial governor Roger Wolcott. He attended Yale College, graduating in 1747. He was commissioned to raise a militia company to fight in the French and Indian War, and he served the King as Captain in this unit on the northern frontier. At the end of the war, Wolcott studied medicine with his brother, Alexander, then was appointed sheriff of the newly created Litchfield County, Connecticut, serving from about 1751 to 1771. He married Lorraine (Laura) Collins of Guilford, Connecticut, on January 21, 1755. They had five children, Oliver (who died young), Oliver Jr., Laura, Mariann, and Frederick.

Wolcott participated in the American Revolutionary War as brigadier general and then major general in the Connecticut militia. His home was busy during the war. General George Washington stayed there and bullets were manufactured there, some from the melted down body of the statue of King George III.

The Continental Congress appointed Wolcott Commissioner of Indian Affairs, and he was elected to the Congress in 1775. He became seriously ill in 1776 and did not sign the Declaration of Independence until some time later. He was engaged in military affairs between 1776 and 1778, and served again in Congress from 1778 to 1784.

Elected Lieutenant Governor of Connecticut in 1786, Wolcott served in that post for ten years. He assumed the Governorship on the death of Samuel Huntington in 1796, and was reelected to the position, holding the office until his death at the age of seventy-one.

Oliver Wolcott, Jr., his son, served as Secretary of the Treasury under Presidents George Washington and John Adams and as Governor of Connecticut. The town of Wolcott, Connecticut was named in honor of Oliver and his son, Oliver Jr. His home in Litchfield was declared a National Historic Landmark in 1971. In Torrington, Connecticut there is a school named after him Oliver Wolcott Technical High School. He was passionate about poetry.

About 1798, Fort Washington on Goat Island in Newport, Rhode Island was renamed Fort Wolcott. Fort Wolcott was an active fortification until 1836. It later became the site of the United States Naval Torpedo Station.