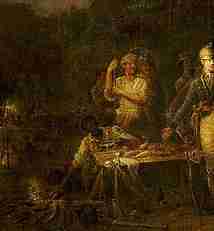 Oscar Marion was an American slave and Revolutionary War militiaman.

Oscar Marion was the servant of General Francis Marion (1732–1795), the legendary “Swamp Fox.” In December 2006, Oscar Marion was recognized as an “African American Patriot” in a ceremony at the U.S. Capitol, and a proclamation signed by President George W. Bush expressed the appreciation of a “grateful nation” for Oscar Marion’s “devoted and selfless consecration to the service of our country in the Armed Forces of the United States.”

It is believed that, following custom, Oscar was made to take the last name of his owner, and he was one of perhaps 200 slaves (many with the last name of Marion) who served Francis Marion. But there may have been a close personal connection between the general and his slave, as some accounts of the general comment on the constant companionship and “faithfulness” of his servant Oscar, according to genealogist Tina C. Jones, a descendant of some of Francis Marion’s slaves.

It is believed that Oscar Marion appears in at least one painting of the general. “General Marion Inviting a British Officer to Share His Meal,” shows an African American male only a few feet from Francis, kneeling at a fire and roasting sweet potatoes as he warily surveys the red-coated officer. In the December 2006 ceremony, President George W. Bush and several congressmen recognized the image as representing Oscar Marion. The painting appeared on Confederate banknotes issued in South Carolina. It currently hangs in the third-floor corridor of the Senate Wing of the U.S. Capitol.

Following his seven years of service with Gen. Marion in the Revolutionary War, Oscar Marion likely returned with the general to Francis Marion’s large Berkeley County, S.C., plantation. There is no evidence that Oscar ever married or had children.