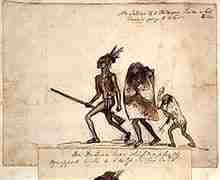 The Odawa (also Ottawa or Odaawaa ə), said to mean “traders,” are a Native American and First Nations people. They are one of the Anishinaabeg, related to but distinct from the Ojibwe and Potawatomi people. Their original homelands are located on Manitoulin Island, near the northern shores of Lake Huron, on the Bruce Peninsula in the present-day province of Ontario, Canada and in the state of Michigan, United States. There are approximately 15,000 Odawa living in Ontario, Michigan and Oklahoma.

The Odawa language is considered a divergent dialect of the Ojibwe, characterized by frequent syncope. The Odawa language, like the Ojibwe language, is part of the Algonquian language family. They also have smaller tribal groups or “bands” commonly called “Tribe” in the United States and “First Nation” in Canada. The Odawa people formerly lived along the Ottawa River but now live especially on Manitoulin Island.

Odaawaa (syncoped as Daawaa, supposedly from the Anishinaabe word adaawe, meaning “to trade,” or “to buy and sell”) is a term common to the Cree, Algonquin, Nipissing, Montagnais, Odawa, and Ojibwe. The Potawatomi spelling of Odawa and the English derivative “Ottawa” are also common. The Anishinaabe word for “Those men who trade, or buy and sell” is Wadaawewinini(wag), which was recorded by Fr. Frederic Baraga in his A Dictionary of the Otchipwe Language as “Watawawininiwok,” but he recorded it as meaning “men of the bulrushes”, from the many bulrushes in the Ottawa River. This recorded meaning is associated with the Matàwackariniwak, a historical band of Algonquins living about the Ottawa River. Their neighbors applied the “Trader” name to the Ottawa because in early traditional times, and also during the early European contact period, they were noted as intertribal traders and barterers. They dealt “chiefly in cornmeal, sunflower oil, furs and skins, rugs and mats, tobacco, and medicinal roots and herbs.”

Like the Ojibwe, the Odawa usually refer to themselves as Nishnaabe (Anishinaabe, plural: Nishnaabeg / Anishinaabeg), meaning “original people.”

The name in its English transcription is the source of the place names of Ottawa, Ontario, and the Ottawa River. The Odawa’s home territory at the time of early European contact, but not their trading zone, was well to the west of the city and river named after them. The tribe is source of the name for Tawas City, Michigan, and Tawas Point, which reflect the syncope-form of their name.

According to Anishinaabeg tradition, and from recordings in Wiigwaasabak (birch bark scrolls), Odawa people came from the eastern areas of North America, or Turtle Island, and from along the East Coast. Directed by the miigis (luminescent) beings, the Anishinaabe peoples moved inland along the Saint Lawrence River. At the “Third Stopping Place” near what is now Detroit, Michigan, the southern group of Anishinaabeg divided into three groups, the Ojibwe, Odawa, and Potawatomi.

The Odawa, together with the Ojibwe and Potawatomi, were part of a long-term tribal alliance called the Council of Three Fires, which fought the Iroquois Confederacy and the Dakota people. In 1615 French explorer Samuel de Champlain met 300 men of a nation which, he said, “we call les cheueux releuez” near the French River mouth. Of these, he said: “Their arms consisted only of a bow and arrows, a buckler of boiled leather and the club. They wore no breech clouts, their bodies were tattooed in many fashions and designs, their faces painted and their noses pierced.” In 1616, Champlain left the Huron villages and visited the “Cheueux releuez” westward from the lands of the Huron Confederacy.

There is archaeological evidence that the Saugeen Complex people, a Hopewell-influenced group who were located on the Bruce Peninsula during the Middle Woodland period, may have evolved into the Odawa people. Some of these peoples constructed earthwork mounds for burials, a practice that ended about 250 CE.

Due to the extensive trade network maintained by the Odawa, many of the North American interior nations became known by names which they used rather than by the nations’ own names. For example, these exonyms include Winnebago (from Wiinibiigoo) for the Ho-Chunk, and Sioux (from Naadawensiw) for the Dakota. From the start of New France, the Odawa became so important to the French and Canadiens in fur trade, that before 1670, colonists in Quebec, then called Canada, usually referred to any Algonquian speaker from the Great Lakes as an Odawa. In their own language, the Odawa (like the Ojibwe) referred to themselves as Anishinaabe (Neshnabek) meaning “people.”

The Odawa had disputes and warfare with other tribes, particularly over the lucrative fur trade.{Citation needed|date=July 2008} For example, the tribe once waged war against the Mascouten.

The Odawa allied with the French against the British in the Seven Years War, known as the French and Indian War in the North American colonies. They made raids against Anglo-American colonists. In 1763, after the British had defeated France, the Odawa chief Pontiac led a rebellion against the British, but he was unable to prevent British occupation of the region. A decade later, Chief Egushawa led the Odawa in the American Revolutionary War as an ally of the British. The defeat of the British by the United States had a far-ranging influence on Native American/First Nations tribes.

In the 1790s, Egushawa fought the United States in a series of battles and campaigns together with other regional tribes in what became known as the Northwest Indian War. The Indians hoped to repulse the European-American pioneers coming to settle west of the Applachian Mountains, but were finally defeated.

In 1807, the Odawa joined three other tribes, the Ojibwe, Potawatomi and Wyandot people, in signing the Treaty of Detroit. The agreement, between the tribes and William Hull, representing the Michigan Territory, gave the United States a portion of today’s Southeastern Michigan and a section of Ohio near the Maumee River. The tribes were able to retain small pockets of land in the territory.

The population of the different Odawa groups is not known with certainty. In 1906, the Ojibwe and Odawa on Manitoulin and Cockburn Island were 1,497, of whom about half were Odawa; there were 197 Odawa under the Seneca School, Oklahoma, and in Michigan 5,587 scattered Ojibwe and Odawa, in 1900, of whom about two-thirds are Odawa. The total Ottawa Tribe of Oklahoma is about 4,700. 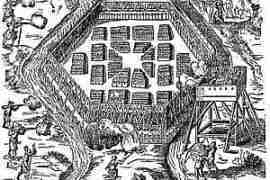 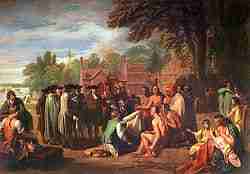 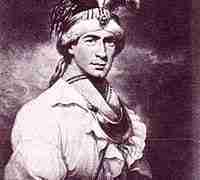