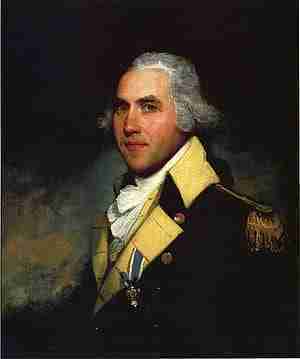 Peter Gansevoort (July 17, 1749 – July 2, 1812) was a Colonel in the Continental Army during the American Revolutionary War. He is best known for leading the resistance to Barry St. Leger’s Siege of Fort Stanwix in 1777. Gansevoort was also the maternal grandfather of Moby-Dick author Herman Melville.

Peter Gansevoort was born into the Dutch aristocracy of Albany, New York. His father Harman (1712–1801) represented the third generation in America, while his mother, Magdalena Douw Gansevoort (1718–1796) was connected with the Van Rensselaer family {Her mother was a granddaughter of Jeremias Van Rensselaer}. His family had been in Albany since 1660, when it was the Dutch colony of Fort Orange, and Harman owned a brewery and farms. His younger brother Leonard was more active politically, serving in the state assembly and senate, as well as the Continental Congress. His son Herman Gansevoort (1779–1862) built the Gansevoort Mansion in 1813 on his father’s {convert|1,500|acre|km2} tract at Gansevoort in Saratoga County, New York. The house was added to the National Register of Historic Places in 1976.

As the American Revolution grew closer, he joined the Albany militia. While he lacked the experience of many older officers, he was a tactful and persuasive leader. Even at his young age, he was over six feet tall, and had a commanding presence. This, along with his family connections, earned him a Lieutenant’s rank.

Gansevoort joined the Continental Army and was made a Major on June 30, 1775 and served as a field commander in the 2nd New York Regiment. Goose Van Schaick was nominally Colonel, he had raised the regiment and served as its commander from Albany. Lt. Colonel Peter W. Yates was the primary field commander, but remained as post commander of Fort George when Major Gansevoort led much of the regiment north with Montgomery’s forces for the invasion of Quebec.

He led his men during the siege of Fort St. Johns, today known by its French name of Fort Saint-Jean. In late October, to improve the effect of the siege, Montgomery sent him down the river to seize Fort Chambly. At Chambly, they captured over 120 barrels of needed gunpowder and a huge mortar which they nicknamed the Old Sow. They also took about 100 prisoners of the Welch Fusilier garrison and their young Captain, John André. Montgomery used Old Sow to open fire on St. Johns, which was compelled to surrender on November 2, 1775. Gansevoort took part in the capture of Montreal, although he became ill during that attack. He started on the advance to Quebec, but by the time the force reached Three Rivers, he was being carried on a stretcher.

He returned to Montreal and spent the winter as one of the sick with the occupation force. By the spring of 1776, the invasion fell apart at Quebec; Montgomery had been killed, and Benedict Arnold was wounded. He had recovered to the point where he led the remaining New York forces south in a fighting withdrawal that stopped the British advance at Lake Champlain. As recognition, in June 1776, he was put in command at Fort George.

In November Gansevoort was made a full Colonel and given command of the 3rd New York Regiment. which he recruited and trained in early 1777. Lt. Colonel Marinus Willett became his second in command. His area of responsibility was extended from the Hudson River valley and Fort Edward and Fort George, along the Mohawk River Valley to Fort Oswego in the northwest. This was to be the axis of Colonel Barry St. Leger’s attack during the Saratoga Campaign.

The 3rd New York did not have the men and equipment to extend that far, even with the support of local militia units. He conceded Fort Oswego to the British, and elected to defend Fort Stanwix (near modern Rome, New York). The fort had been abandoned after the French and Indian War and was in ruins. He and Willett restored the fort and strengthened its defenses. They hurriedly set up a garrison, getting the last boatload of supplies into the fort under fire from St. Leger’s advance force on August 2.

He and his more than 700-strong garrison withstood the three-week-long siege, making a sortie on August 6, while much of St. Leger’s force was occupied in the Battle of Oriskany. The siege was lifted on August 22, after word arrived that Benedict Arnold was leading a large relief force up the Mohawk valley.

He received the grateful thanks of the Congress, as John Adams noted that “Gansevoort has proven that it is possible to hold a fort.”

Gansevoort eventually turned Fort Stanwix over to a garrison of the 1st New York Regiment. He moved his headquarters to his new command at Fort Saratoga (near modern Schuylerville, New York). He led his regiment in the Sullivan Expedition of 1779. He had another bout of illness that winter (1779–1780) and returned home for a while, but, by July 1780, he was back with the 3rd at West Point. He was assigned to command the New York Brigade, and reestablished his headquarters at Fort Saratoga.

In the reorganization and downsizing of the New York Line in 1781, Gansevoort was left with no assignment in the Continental Army. He returned home and became Brigadier General of the Albany County Militia.

Gansevoort continued to make his home in Albany where he operated the family brewery. He expanded his farms, adding grist mills and a lumber mill, in the area that eventually became Gansevoort, New York. He served for a while as sheriff of Albany County, as a commissioner of Indian affairs, and continued his support of the military in the militia and as a quartermaster. In 1800, he ran for U.S. Senator from New York but was defeated by Federalist Gouverneur Morris.

He had married Catherine “Katy” Van Schaik on January 12, 1778 in her family’s home on Van Schaick Island, Cohoes, NY. She was the daughter of Wessel and Maria Van Schaik, and her cousin Goose Van Schaick had been Peter’s commander and Colonel in 1775. Over the years, they had at least three children: Peter Gansevoort Jr. (1788–1876), Leonard and Maria. Leonard’s son Guert Gansevoort had a distinguished naval career that spanned 45 years. Maria married Alan Melvill in 1814, and their son was the author Herman Melville.

In 1809, he was made a Brigadier General in the United States Army and commanded the Northern Department. In 1811, he was called on to preside over the court-martial of General James Wilkinson who was charged as an accomplice in Aaron Burr’s western conspiracy. Wilkinson was found not guilty, and the court adjourned on Christmas Day. Hurrying back to his family, his old illness returned, and he never recovered. He died at home in Albany on July 2, 1812.