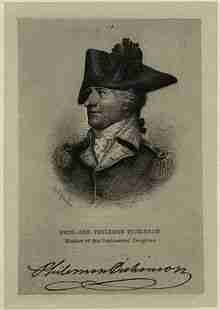 Philemon Dickinson (April 5, 1739{spaced ndash}February 4, 1809) was an American lawyer and politician from Trenton, New Jersey. As a brigadier general of the New Jersey militia, he was one of the most effective militia officers of the American Revolutionary War. He was also a Continental Congressman from Delaware and a United States Senator from New Jersey.

Dickinson was born in Maryland. When he was one, his family moved to Delaware. He was educated by a private tutor until he went to the University of Pennsylvania, from where he graduated in 1759. He then studied law, and was admitted to the bar, but never practiced. In 1767, Dickinson moved to Trenton, New Jersey. On 14 July 1767, he married his first cousin, Mary Cadwalader (1746–1781). They had two children; Samuel (1770–1837) and Mary (1768–1822). He served as an officer during the American Revolutionary War, rising to the rank of Major General in the New Jersey Militia.

In 1782 and 1783, he represented Delaware at the Continental Congress. In 1783-84 he was elected to the New Jersey Legislative Council from Hunterdon County where he served as Vice-President of Council both years. He was a member of the commission that selected the site for the national capital in Washington, D.C. in 1784. When William Paterson resigned from the United States Senate, Dickinson was chosen by New Jersey to finish Paterson’s term. He served in the senate from November 13, 1790 to March 4, 1793. After his service in Congress, he returned to look after his estates until he died in 1809, and was buried at Friends Burying Ground in Trenton.

Commanding general of the New Jersey militia during the Revolutionary War, a delegate to the Continental Congress, and a U.S. Senator, Philemon Dickinson was born at “Crosiadore,” near Trappe, Maryland on April 5, 1739, a younger brother of John Dickinson. After graduation in the first class from the college of Philadelphia in 1757, he studied law, but never practiced. In 1767 he moved to an estate, “The Hermitage,” near Trenton, New Jersey. At the beginning of the Revolutionary War in 1775 he was commissioned a colonel of the Hunterdon County militia. In 1776 he was elected as a delegate to New Jersey’s Revolutionary provincial congress. In January 1777 Dickinson led 400 of his militia in a raid on a British foraging party near Somerset Court House, New Jersey, capturing about forty wagons of supplies and several prisoners. In June 1777 he was appointed major general in command of all New Jersey militia, a post he held throughout the rest of the war. Dickinson’s militia took part in the battle of Monmouth in 1778, helping obstruct the retreat of the British to New York. When his cousin John Cadwalader dueled General Thomas Conway on July 4, 1778, Dickinson was Cadwalader’s second. Dickinson represented New Jersey in the Continental Congress in 1782-83, and the following year served on the commission to choose the site for a national capital. He was elected by the New Jersey legislature as a U.S. Senator in 1790-93, and after that retired to his estate, “The Hermitage,” where he died on February 4, 1809. Revolutionary Generals By S. Maner