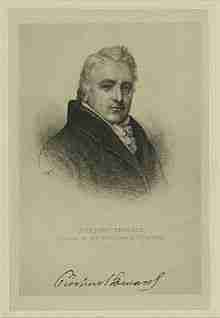 Pierpont Edwards (April 8, 1750 – April 5, 1826) was a delegate to the American Continental Congress, and later a United States federal judge. He has been described as “a brilliant but erratic member of the Connecticut bar, tolerant in religious matters and bitterly hated by stern Calvinists, a man whose personal morality resembled greatly that of Aaron Burr”{Citation needed|date=June 2010}. Pierpont Edwards was the founder of the Toleration Party in Connecticut.

He was born in Northampton, Massachusetts as the 11th and youngest child of the Rev. Jonathan Edwards. Pierrepont Edwards graduated from Princeton College in 1768, at the age of 18, and entered private practice of law in New Haven, Connecticut in 1771. He served in the Continental Army during the American Revolutionary War, and thereafter was a member of the Connecticut House of Representatives in 1777, a Delegate from Connecticut to the Continental Congress from 1787 to 1788, and a member of the Connecticut Convention held in January 1788, a convention that ratified the Constitution of the United States. After the treason of Benedict Arnold, he became administrator of that officer’s estate. Edwards was again in the Connecticut House of Representatives from 1784 to 1785 and from 1787 to 1790. He was in private practice of law in New Haven, Connecticut from 1790 to 1806, also serving in that time as the United States Attorney for Connecticut.

He died in Bridgeport, Connecticut, and was interred at Grove Street Cemetery. Pierpont Township, Ashtabula County, Ohio is named for him. There is a dormitory building at UMass Amherst named after him as well.

He was the uncle of Aaron Burr, Theodore Dwight, and Timothy Dwight IV, and father of Henry W. Edwards and John Stark Edwards.