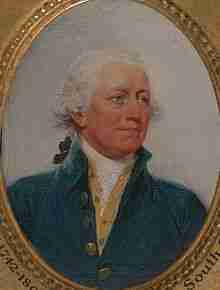 Izard was born at “The Elms” near Charleston, South Carolina. He was the son of Henry Izard and Margaret Johnson. His great-grandfather was Ralph Izard (1660–1710), who was born in Dorchester, England and settled in South Carolina. His maternal grandfather was Province of South Carolina Governor Robert Johnson. Izard’s parents died when he was a small child, and only one of his siblings survived to adulthood. He spent most of his childhood and youth studying in England: he attended a school in Hackney, London, and matriculated as a fellow-commoner at Trinity Hall, Cambridge. Izard returned to America in 1764, but did not remain in South Carolina for long. In 1767, he married Alice DeLancey of New York (a niece of James DeLancey). They had 13 children between 1768 and 1792.

He resided in London in 1771 and moved to Paris, France, in 1776. He was appointed commissioner to the Court of Tuscany by the Continental Congress in 1776, but was recalled in 1779. He returned to America in 1780 and pledged his large estate in South Carolina for the payment of war ships to be used in the American Revolutionary War. He was a member of the Continental Congress in 1782 and 1783. In 1788, he was elected to the United States Senate and served from March 4, 1789, to March 4, 1795, serving as President pro tempore of the Senate during the Third Congress.

Izard retired from public life to the care of his estates and died near Charleston. He is interred in the churchyard of St. James Goose Creek Episcopal Church, near Charleston.

Izard was one of the founders of the College of Charleston. His children and relations married well:

* His son Ralph, was a naval hero of Tripoli. The World War II USS Izard was named after him. (Ralph’s wife was a niece of Arthur Middleton.)
* A son, Major General George Izard, was a Governor of Arkansas.
* A daughter, Anne, married William Allan Deas {1764-1863} with whom they had a son, the painter, Charles Deas. William’s brother was Col James Sutherland Deas {1784-1864} who was the father of CS General Zachariah Cantey Deas
* A daughter Charlotte married William Loughton Smith {a son of S.C. Assemblyman Benjamin Smith}; William L. Smith was also a brother-in-law of South Carolina Congressman Isaac Motte.
* A cousin Sarah Izard married South Carolina Loyalist Governor Lord William Campbell.
* One niece was a daughter-in-law of Loyalist Governor of Georgia James Wright (governor).
* Another niece was a daughter-in-law of Congressman of South Carolina Thomas Pinckney.
* A great-grandson of Ralph Izard was Charles Manigault Morris who was also a great-grandson of Lewis Morris. A cousin of Charles Manigault Morris was General Arthur Middleton Manigault who was descended from Mary Izard-cousin of Ralph Izard