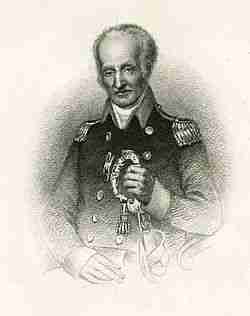 Return Jonathan Meigs [born December 17 (old style) or December 28 (new style), 1740; died January 28, 1823] was a colonel who served in the Continental Army during the American Revolutionary War, was one of the founding settlers of the Northwest Territory in what is now the state of Ohio, and later served as a federal government Indian agent working with the Cherokee in Tennessee.

He served in the local militia, advancing to the rank of captain in 1774. On April 19, 1775, after the Battle of Lexington, he led a company of light infantry to Boston. There he was appointed to the rank of major in the 2nd Connecticut Regiment, a provincial regiment of the Continental Army. Later that year, serving as a division (battalion) commander under Colonel Benedict Arnold, he accompanied Arnold on his 1,100-man expedition through Maine to Canada. Meigs was captured by the British in the assault on Quebec City and imprisoned, but was paroled on May 16, 1776, by British Gen. Guy Carleton as consideration for Meigs’ decent treatment of a British prisoner, Captain Law, Carleton’s chief engineer. Meigs returned to Connecticut by way of Halifax and subsequently returned to military service.

One of his most important achievements during the Revolutionary War was leading the Meigs Raid against the British forces in Sag Harbor, New York, in May 1777. With 220 men in a fleet of 13 whaleboats, he crossed Long Island Sound from Connecticut to Long Island to attack the British fleet at night. The raid succeeded in burning 12 ships and taking 90 prisoners, without losing a single man. The U.S. Congress awarded him a presentation sword for his heroism. Colonel Douglas died on May 28, and Meigs received appointment as colonel of the 6th Connecticut by Governor Trumbull on September 10, 1777, with a date of rank of May 12.

When a Corps of Light Infantry was formed under General Anthony Wayne in July 1779, Meigs was given command of its 3rd Regiment, which he led at the Battle of Stony Point. Following its disbandment in December, he returned to the 6th Connecticut and became acting commander of the 1st Connecticut Brigade. In that capacity he put down an incipient mutiny and received the written thanks of Gen. George Washington. On January 1, 1781, the Continental Main Army reorganized, consolidating many regiments. The Connecticut Line was reduced from eight to five regiments, retiring four colonels, including Meigs.

After the war Meigs was appointed surveyor of the Ohio Company of Associates. In April 1788 he was an American pioneer to the Northwest Territory; he participated in the founding of Marietta, Ohio and drew up the code of regulation used until the formal creation of the Northwest Territory the following year.

In 1801 Meigs went to Tennessee to fill the combined position of agent to the Cherokee Nation and military agent for the United States War Department. Initially his office and the Cherokee Agency were at Fort Southwest Point in what is now Kingston, Tennessee, but in 1807 he relocated these operations to a new post further east, named Hiwassee Garrison. It was near the mouth of the Hiwassee River where it joins the Tennessee River. Charles R. Hicks, a mixed-race and bilingual Cherokee, worked as his interpreter for some time. Hicks later became a chief of the Cherokee.

Meigs’ role as military agent ended in 1813 when the Federal soldiers stationed at Hiwassee Garrison were withdrawn, but he remained as Cherokee agent on the Hiwassee River until his death on January 28, 1823. The government’s trading or factory operations were linked with Indian relations in the War Department during these years. As Cherokee agent, Meigs promoted the well-being of the Cherokee, defended their rights in treaty negotiations, and encouraged Cherokee efforts to establish a republican form of government.

He is buried in the Garrison Cemetery in Rhea County, Tennessee, near the site of the former Hiwassee Garrison.

Two Tennessee place names honor Meigs. Meigs County, which was formed in 1836 from part of Rhea County, and Meigs Mountain in the Great Smoky Mountains are both named in his honor.