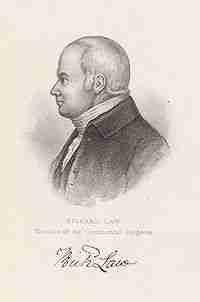 On September 24, 1789, Law was nominated by President George Washington to a seat on the newly established United States District Court for the District of Connecticut, created by 1 Stat. 73. Law was confirmed by the United States Senate on September 26, 1789, and received his commission the same day. Law served tehreafter until his death, in New London.

His son, Lyman Law, would later represent Connecticut in the U. S. Congress. His grandson, John Law, served as United States Representative from Indiana.