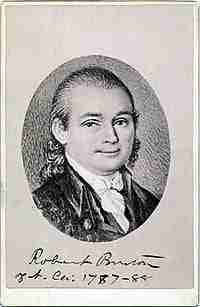 Robert Burton (October 20, 1747 – May 31, 1825) was an American farmer, Revolutionary War officer, and plantation owner in what is now Vance County, North Carolina (then Granville County, North Carolina). He was a delegate from North Carolina to the Continental Congress in 1787. Between 1783 and 1815, the North Carolina General Assembly elected him to 13 one-year terms on the Council of State, which at the time was an official advisory panel that the legislature used to check the governor’s power.

Burton was the uncle of Governor Hutchins G. Burton.