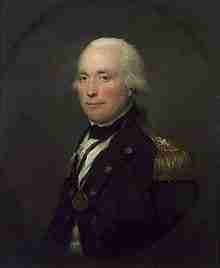 He was born in Elgin, Scotland, the third son of Sir James Calder and Alice Hughes. His father was the 3rd Baronet Calder of Muirton, who had been appointed Gentleman Usher of the Privy chamber to the queen by Lord Bute in 1761. His elder brother, who succeeded to his father’s baronetcy, was Major General Sir Henry Calder.

Calder was educated at the grammar school of Elgin, and entered the Royal Navy in 1759 at the age of fourteen. As a Midshipman he received £1,800 in prize money for his part in the capture of the Spanish treasure ship Hermione on 21 May 1762, and was subsequently promoted to Lieutenant. At that rank he served aboard the Essex, under Captain the Hon. George Faulkner, in the Caribbean. Promotion came slowly, and it was not until 1780 that he attained the rank of Post-Captain. He commanded the frigate HMS Diana under Admiral Richard Kempenfelt, and acquitted himself honourably in the various services to which he was called, but for a long time had no opportunity of distinguishing himself.

In 1796 he was appointed Captain of the Fleet to Admiral John Jervis, and saw action at the battle of Cape St Vincent on 14 February 1797. After the battle he was selected to carry the dispatches announcing the victory back to Britain, and was knighted by George III on 3 March 1797 for his services. He also received the thanks of Parliament, and was created 1st Baronet Calder of Southwick on 22 August 1798.

In 1799 he was promoted to Rear-Admiral; and in 1804, now a Vice-Admiral, was despatched with a small squadron in pursuit of a French force under Admiral Ganteaume, conveying supplies to the French in Egypt. In this he was unsuccessful, and returning home at the peace he struck his flag.

In the War of the Third Coalition (1805–1806) he was in command of the squadrons blockading the ports of Rochefort and Ferrol, in which (amongst others) ships were being prepared for the invasion of England by Napoleon I. Calder held his position with a force greatly inferior to that of the enemy, and refused to be enticed out to sea.

On its becoming known that Napoleon intended to break the blockade of Ferrol, as a prelude to his invasion, the Admiralty ordered Rear-Admiral Charles Stirling to join Calder and intercept the Franco-Spanish fleet on their passage to Brest. The approach of the enemy was concealed by fog; finally on 22 July 1805 the fleets came into sight. The allies outnumbered the British; but Calder ordered his fleet into action. The ensuing battle was battle of Cape Finisterre: fifteen British ships had engaged twenty French and Spanish ships and captured two. The British losses were 39 officers and men killed and 159 wounded; the allies lost 158 dead and 320 wounded. After four hours, as night fell, Calder gave orders to discontinue the action. Over the following two days the fleets remained close to one another, but did not engage again. Calder decided to protect his newly won prizes, while the French Admiral Villeneuve declined to force another engagement. Villenueve left the area on the 24th, sailing to Ferrol, and eventually Cádiz, instead of resuming his course to Brest. Villeneuve had failed in all his objectives: he had landed no troops in Ireland, and the plan of linking with the fleet at Brest, driving off the British Channel squadrons, and supporting Napoleon’s invasion of Britain came to nothing: the Armée d’Angleterre waited uselessly at Boulogne as before. In the judgment of Napoleon, his scheme of invasion was baffled by this day’s action; but much indignation was felt in England at the failure of Calder to win a complete victory.

In consequence of the strong feeling against him Calder demanded a court-martial. Nelson was ordered to send Calder home, and allowed him to return in his own 98-gun ship the Prince of Wales, even though battle was imminent. Calder left in early October 1805, missing the battle of Trafalgar. The court-martial was held on 23 December 1805, and resulted in a severe reprimand for Calder for not having done his utmost to renew the engagement, at the same time acquitting him of cowardice and disaffection. Calder never served at sea again. In the natural course of events he was promoted to Admiral on 31 July 1810, and by way of public testimony to his services, and of acquittal of the charge made against him, was created a Knight Commander, Order of the Bath on 2 January 1815. He was appointed Commander-in-Chief, Plymouth in 1810. He died at Holt, near Bishop’s Waltham, in Hampshire, in 1818.

In 1779 he married Amelia Michell; they had no children.