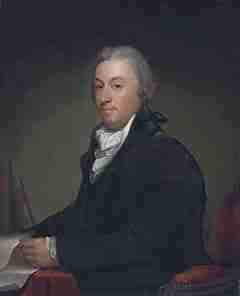 Robert R. Livingston was the eldest son of Judge Robert Livingston (1718-1775) and Margaret Beekman Livingston. He had nine brothers and sisters, all of whom wed and made their homes on the Hudson River near the family seat at Clermont Manor. Livingston graduated from King’s College, the predecessor to today’s Columbia University, in 1765.

He married Mary Stevens, daughter of Continental Congressman John Stevens, on September 9, 1770, and built a home for himself and his wife south of Clermont, called Belvedere, which was burned to the ground, along with Clermont, in 1777 by the British Army. In 1794, he built a new home called New Clermont, which was subsequently renamed Arryl House – a phonetic spelling of his initials, “RRL” – which was deemed “the most commodious home in America” and contained a library of four thousand volumes.

Livingston was appointed Recorder of New York City in October 1773, but soon identified himself with the anti-colonial Whig Party and was replaced a few months later with John Watts, Jr. He was a member of the Committee of Five that drafted the Declaration of Independence, although he was recalled by his state before he could sign the final version of the document.

From 1777 to 1801, he was the first Chancellor of New York, then the highest judicial officer in the state. He became universally known as “The Chancellor”, retaining the title as a nickname even after he left the office. Livingston was also U.S. Secretary of Foreign Affairs from 1781 to 1783, under the Articles of Confederation. In 1789, as Chancellor of New York, he administered the presidential oath of office to George Washington at Federal Hall in New York City, then the capital of the United States.

In 1789, Livingston joined the Jeffersonian Republicans (later known as the Democratic-Republicans), in opposition to his former colleagues John Jay and Alexander Hamilton who founded the Federalists. He formed an uneasy alliance with his previous rival George Clinton, along with Aaron Burr, then a political newcomer. He opposed the Jay Treaty and other Federalist initiatives.

In 1798, Livingston ran for Governor of New York on the Democratic-Republican ticket, but was defeated by Governor John Jay who was re-elected.

We have lived long but this is the noblest work of our whole lives … The United States take rank this day among the first powers of the world.

During his time as Minister to France, Livingston met Robert Fulton, with whom he developed the first viable steamboat, the North River Steamboat, whose home port was at the Livingston family home of Clermont Manor in the town of Clermont, New York. On her first voyage, she left New York City, stopped briefly at Clermont Manor, and continued on to Albany up the Hudson River, completing in just under 60 hours a journey which had previously taken nearly a week by sloop. In 1811, both Fulton and Livingston became members of the Erie Canal Commission.

Livingston was a Freemason, and in 1784, he was appointed the first Grand Master of the Grand Lodge of New York. He retained this title until 1801. The Grand Lodge’s library in Manhattan bears his name. The Bible Livingston used to administer the oath of office to President Washington is owned by St. John’s Lodge No. 1, and is still used today when the Grand Master is sworn in, and, by request, when a President of the United States is sworn in.

After his death, Livingston was buried in Tivoli, New York.