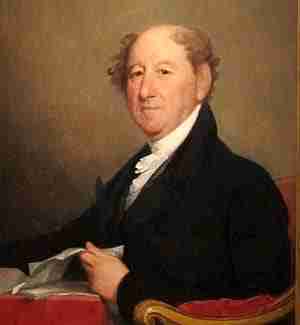 Rufus King (March 24, 1755{spaced ndash}April 29, 1827) was an American lawyer, politician, and diplomat. He was a delegate for Massachusetts to the Continental Congress. He also attended the Constitutional Convention and was one of the signers of the United States Constitution on September 17, 1787, in Philadelphia, Pennsylvania. He represented New York in the United States Senate, served as Minister to Britain, and was the Federalist candidate for both Vice President (1804, 1808) and President of the United States (1816).

He was born on March 24, 1755 at Scarborough which was then a part of Massachusetts but is now in the state of Maine. He was a son of Sabilla Blagden and Richard King, a prosperous farmer-merchant, who had settled at Dunstan Landing in Scarborough, near Portland, Maine, and had made a modest fortune by 1755, the year Rufus was born.

His financial success aroused the jealousy of his neighbors, and when the Stamp Act 1765 was imposed, and rioting became almost respectable, a mob ransacked his house and destroyed most of the furniture. Nobody was punished, and the next year the mob burned down his barn. It was not surprising that Richard King became a loyalist. All of his sons, however, became patriots in the American War of Independence.

King attended Dummer Academy (now The Governor’s Academy) and Harvard College, graduating in 1777. He began to read law under Theophilus Parsons, but his studies were interrupted in 1778 when King volunteered for militia duty in the American Revolutionary War. Appointed a major, he served as an aide to General Sullivan in the Battle of Rhode Island. After the campaign, King returned to his apprenticeship under Parsons.

He was admitted to the bar in 1780 and began a legal practice in Newburyport, Massachusetts. King was first elected to the Massachusetts state assembly in 1783, and returned there each year until 1785. Massachusetts sent him to the Confederation Congress from 1784 to 1787. He was one of the youngest at the conference.

In 1787, King was sent to the Federal constitutional convention at Philadelphia where he worked closely with Alexander Hamilton on the Committee of Style and Arrangement to prepare the final draft. He returned home and went to work to get the Constitution ratified and to position himself to be named to the U.S. Senate. He was only partially successful. Massachusetts ratified the Constitution, but his efforts to be elected to the Senate failed.

At Hamilton’s urging, he moved to New York City, and was elected to the New York State Assembly in 1789. When the United States Constitution took effect, the State Legislature disagreed on who should be chosen besides Philip Schuyler for U.S. Senator from New York. Alexander Hamilton endorsed Rufus King as a candidate, thwarting the plans of the prominent Livingston family, who had hoped to place one of their own, James Duane, on the seat. Governor George Clinton, looking to cause a rift between the Livingstons and the Schuyler family (Hamilton was Philip Schuyler’s son-in-law), discreetly supported King, and as a result he was elected in 1789. He was re-elected in 1795 but resigned on May 23, 1796, having been appointed U. S. Minister to Great Britain. Before becoming Minister to Britain, King was offered the post of Secretary of State by President George Washington but declined it.

King played a major diplomatic role as Minister to the Court of St. James from 1796 to 1803, and again from 1825 to 1826. Although he was a leading Federalist, Thomas Jefferson kept him in office until King asked to be relieved. He successfully settled disputes that the Jay Treaty had opened for negotiation. His term was marked by friendship between the U.S. and Britain; it became hostile after 1805. While in Britain, he was in close personal contact with South American revolutionary Francisco de Miranda and facilitated Miranda’s trip to the United States in search of support for his failed 1806 expedition to Venezuela.

He was the unsuccessful Federalist Party candidate for Vice President in 1804 and 1808. In 1813, he was elected again to the U.S. Senate, and served until March 4, 1819. In April 1816, he lost the election for Governor of New York to the incumbent Daniel D. Tompkins of the Democratic-Republican Party. Later that year, King was nominated by the Federalists in the United States presidential election, 1816, but lost again. King was the last presidential candidate to be nominated by the Federalists before their collapse at the end of the First Party System of the United States.

In 1819, he ran for re-election as a Federalist, but the party was already disbanding and had only a small minority in the New York State Legislature. Due to the split of the Democratic-Republicans, no successor was elected to the U.S. Senate, and the seat remained vacant until January 1820 when King was elected again. Trying to attract the former Federalist voters to their side at the next gubernatorial election in April 1820, both factions of the Democratic-Republican Party supported King, who served another term in the U.S. Senate until March 4, 1825.

In 1822 he was admitted as an honorary member of the New York Society of the Cincinnati.

King had a long history of opposition to the expansion of slavery and the slave trade. This stand was a product of moral conviction which coincided with the political realities of New England federalism. While in Congress, he successfully added provisions to the 1785 Northwest Ordinance which barred the extension of slavery into the Northwest Territory. But he also said he was willing “to suffer the continuance of slaves until they can be gradually emancipated in states already overrun with them.” He did not press the issue very hard at this time. At the Constitutional Convention, he indicated that his opposition to slavery was based upon the political and economic advantages it gave to the South, but he was willing to compromise for political reasons.

In 1817, he supported Senate action to abolish the domestic slave trade and, in 1819, spoke strongly for the antislavery amendment to the Missouri statehood bill. In 1819, his arguments were political, economic, and humanitarian; the extension of slavery would adversely affect the security of the principles of freedom and liberty. After the Missouri Compromise, he continued to support gradual emancipation in various ways.

At the time of his death in 1827, King had a library of roughly 2,200 titles in 3,500 volumes. In addition, King had roughly 200 bound volumes containing thousands of pamphlets. King’s son John Alsop King inherited the library and kept them in Jamaica, Queens, until his death in 1867. The books then went to John’s son Dr. Charles Ray King of Bucks County, Pennsylvania. They remained in Pennsylvania until donated to the New-York Historical Society in 1906, where most of them currently reside. Some books have extensive marginalia. In addition, six commonplace books survive in his papers at the New-York Historical Society.