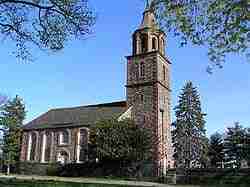 Saint Paul’s Church National Historic Site is a United States National Historic Site located in Mount Vernon, New York, just north of the New York City borough of The Bronx. The site was authorized in 1978 to protect Saint Paul’s Church from increasing industrialization of the surrounding area. Saint Paul’s Church was one of New York’s oldest parishes and was used as a military hospital after the American Revolutionary War Battle of Pell’s Point in 1776. The {convert|5|acre|m2|adj=on} cemetery surrounding the church is also within the historic site and contains an estimated 9,000 burials dating from 1704.

On October 18, 1776, the Revolutionary War Battle of Pell’s Point was fought less than a mile from the church, and the church served as a hospital for the British Army following the battle. The church’s tower contains a bell that was cast in 1758 at the same London foundry as the Liberty Bell. As the fighting began to move closer to the church, George Washington ordered the parishioners to bury the bell to prevent the British from melting it down and using it for ammunition. The bell still hangs in the tower today.

During the early part of the 20th century, the parish began to decline and the last Sunday service held at Saint Paul’s took place in May 1977.

It was designated as a National Historic Site on July 5, 1943 although not formally authorized until November 10, 1978.

Today, visitors can visit the church and the 225-year-old church tower on ranger-guided tours. A carriage house next to the church now serves as a museum and visitor center. The site was opened to the public in 1984 and is now operated by the National Park Service under a cooperative agreement with the Society of the National Shrine of the Bill of Rights at Saint Paul’s Church, Eastchester.