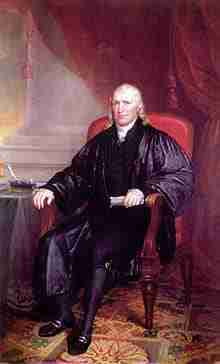 Samuel Chase (April 17, 1741 – June 19, 1811) was an Associate Justice of the United States Supreme Court and earlier was a signatory to the United States Declaration of Independence as a representative of Maryland. Early in life, Chase was a “firebrand” states-righter and revolutionary. His political views changed over his lifetime, and, in the last decades of his career, he became well known as a staunch Federalist and was impeached for allegedly letting his partisan leanings affect his court decisions. Chase was acquitted by the Senate.

His father was a clergyman who immigrated to Somerset County to become a priest in a new church. Samuel was educated at home. He was eighteen when he left for Annapolis where he studied law under attorney John Hall. He was admitted to the bar in 1761 and started a law practice in Annapolis. It was during his time as a member of the bar that his colleagues gave him the nickname of “Old Bacon Face.”

In May 1762, Chase married Ann Baldwin, daughter of Thomas Baldwin and his wife Agnes. Samuel and Ann had had three sons and four daughters, with only four surviving to adulthood. Anne died in 1776.

In 1784, Chase traveled to England to deal with Maryland’s Bank of England stock, where he met Hannah Kilty, daughter of Samuel Giles, a Berkshire physician. They were married later that year and had two daughters, Hannah and Elisa.

In 1762, Chase was expelled from the Forensic Club, an Annapolis debating society, for “extremely irregular and indecent” behavior.

In 1764, Chase was elected to the Maryland General Assembly where he served for twenty years.

In 1766, he became embroiled in a war of words with a number of loyalist members of the Maryland political establishment. In an open letter dated July 18, 1766, Chase attacked Walter Dulany, George Steuart (1700–1784), John Brice (1705–1766) and others for publishing an article in the Maryland Gazette Extraordinary of June 19, 1766, in which Chase was accused of being: “a busy, reckless incendiary, a ringleader of mobs, a foul-mouthed and inflaming son of discord and faction, a common disturber of the public tranquility”. In his response, Chase accused Steuart and the others of “vanity…pride and arrogance”, and of being brought to power by “proprietory influence, court favour, and the wealth and influence of the tools and favourites who infest this city.”

In 1769, he started construction of the mansion that would become known as the Chase-Lloyd House, which he sold unfinished in 1771. The house is now a National Historic Landmark.

He co-founded Anne Arundel County’s Sons of Liberty chapter with his close friend William Paca as well as leading opposition to the 1765 Stamp Act.

From 1774 to 1776, Chase was a member of the Annapolis Convention. He represented Maryland at the Continental Congress, was re-elected in 1776 and signed the United States Declaration of Independence.

In 1786, Chase moved to Baltimore, which remained his home for the rest of his life. In 1788, he was appointed Chief justice of the District Criminal Court in Baltimore and served until 1796. In 1791, he became Chief Justice of the Maryland General Court, again serving until 1796.

On January 26, 1796, President George Washington appointed Chase as an associate justice of the Supreme Court of the United States. Chase served on the Court until his death on June 19, 1811.

President Thomas Jefferson, alarmed at the seizure of power by the judiciary through the claim of exclusive judicial review, led his party’s efforts to remove the Federalists from the bench. His allies in Congress had, shortly after his inauguration, repealed the Judiciary Act of 1801, abolishing the lower courts created by the legislation and terminating their Federalist judges despite lifetime appointments; Chase, two years after the repeal in May 1803, had denounced it in his charge to a Baltimore grand jury, saying that it would “take away all security for property and personal liberty, and our Republican constitution will sink into a mobocracy[.]” Jefferson saw the attack as indubitable bad behavior and an opportunity to reduce the Federalist influence on the judiciary by impeaching Chase, launching the process from the White House when he wrote to Congressman Joseph Hopper Nicholson of Maryland asking: “Ought the seditious and official attack [by Chase] on the principles of our Constitution . . .to go unpunished?”

Virginia Congressman John Randolph of Roanoke took up the challenge and took charge of the impeachment. The House of Representatives served Chase with eight articles of impeachment in late 1804, one of which involved Chase’s handling of the trial of John Fries. Two more focused on his conduct in the political libel trial of James Callender. Four articles focused on procedural errors made during Chase’s adjudication of various matters, and an eighth was directed at his “intemperate and inflammatory … peculiarly indecent and unbecoming … highly unwarrantable … highly indecent” remarks while “charging” or authorizing a Baltimore grand jury. The Jeffersonian Republicans-controlled United States Senate began the impeachment trial of Chase in early 1805, with Vice President Aaron Burr presiding and Randolph leading the prosecution.

All the counts involved Chase’s work as a trial judge in lower circuit courts. (In that era, Supreme Court justices had the added duty of serving as individuals on circuit courts, a practice that was ended in the late 19th century.) The heart of the allegations was that political bias had led Chase to treat defendants and their counsel in a blatantly unfair manner. Chase’s defense lawyers called the prosecution a political effort by his Republican enemies. In answer to the articles of impeachment, Chase argued that all of his actions had been motivated by adherence to precedent, judicial duty to restrain advocates from improper statements of law, and considerations of judicial efficiency.

The Senate voted to acquit Chase of all charges on March 1, 1805. He is the only U.S. Supreme Court justice to have been impeached.

The impeachment raised constitutional questions over the nature of the judiciary and was the end of a series of efforts to define the appropriate extent of judicial independence under the Constitution. It set the limits of the impeachment power, fixed the concept that the judiciary was prohibited from engaging in partisan politics, defined the role of the judge in a criminal jury trial, and clarified judicial independence. The construction was largely attitudinal as it modified political norms without codifying new legal doctrines.

The acquittal of Chase — by lopsided margins on several counts — set an unofficial precedent that many historians say helped ensure the independence of the judiciary. As Chief Justice William Rehnquist noted in his book Grand Inquests, some senators declined to convict Chase despite their partisan hostility to him, apparently because they doubted that the mere quality of his judging was grounds for removal. Furthermore, federal judges became much more cautious by avoiding the appearance of political partisanship. All impeachments of federal judges since Chase have been based on allegations of legal or ethical misconduct, not on judicial performance.

Samuel Chase died of a heart attack in 1811. He was interred in what is now Old Saint Paul’s Cemetery.