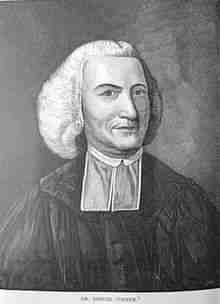 Samuel Cooper (March 28, 1725 – December 29, 1783) was a Congregational minister in Boston, Massachusetts, affiliated with the Brattle Street Church. He was born in Boston to William Cooper and Judith Sewall, attended the Boston Latin School, and was graduated from Harvard College in 1743. He was ordained as a minister on May 21, 1746, and served as pastor of the Brattle Street Church, 1747-1783. Members of his parish at the Brattle St. Church included some of the most influential people of the American Revolution: John Hancock, Samuel Adams, Joseph Warren, John Adams, and others. He corresponded with Benjamin Franklin, Charles Hector d’Estaing, Gideon Hawley, Charles Gravier de Vergennes; and was associated with Phillis Wheatley. In 1780, he co-founded the American Academy of Arts and Sciences. He served as “chaplain to the General Court” 1758-1770 and 1777-1783. Around 1783 Harvard College offered Cooper the position of college president, but Cooper declined. In September 1746 he married Judith Bulfinch; they had two daughters. A portrait of Cooper by John Singleton Copley now resides in the collection of the Massachusetts Historical Society.