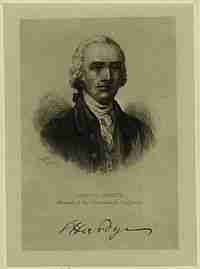 Samuel Hardy (1758 – October 17, 1785) was an American lawyer and statesman from Virginia, who served as a delegate to the Continental Congress.

Born in Isle of Wight County, Virginia, Samuel was educated at Virginia’s College of William and Mary, began the practice of law, and served in the Virginia House of Delegates. He was a member of the Continental Congress from Virginia from 1783 until 1785. On May 6, 1784, he voted against the resolution in the Congress restricting the salary of a foreign minister of the United States to $8,000, and on May 7 opposed the motion that the salary of a United States Secretary for Foreign Affairs should not exceed $3,000 per annum. In May 1784, he nominated Thomas Jefferson as minister plenipotentiary to Europe to assist John Adams and Benjamin Franklin in negotiating treaties of commerce; and in January 1785, was a member of a committee that reported on letters that had been received from United States ministers in Europe relative to a foreign loan. He served for a time Lieutenant Governor of Virginia.

Hardy died in Philadelphia, Pennsylvania while traveling to the Congress, and is buried in the Christ Church Burial Ground there. He was a friend of Alexander Hamilton, who wrote a poetical tribute to his memory. Hardy County, West Virginia is named in his honor.