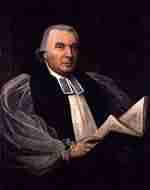 Samuel Seabury was born in North Groton, Connecticut in 1729. His father, also Samuel Seabury (1706–1764), originally a Congregationalist minister in Groton, was ordained deacon and priest in the Church of England in 1730, and was a rector in New London, Connecticut, from 1732 to 1743, and of St George’s, Hempstead, Long Island, from 1743 until his death.

Samuel Seabury (the son) graduated from Yale College in 1748, and studied theology with his father. He studied medicine in Edinburgh from 1752 to 1753 and was ordained deacon by the Bishop of Lincoln and priest by the Bishop of Carlisle in 1753. Seabury was rector of Christ Church, New Brunswick, New Jersey from 1754 to 1757, rector in Jamaica, New York from 1757 to 1766, and of St. Peter’s, Westchester (now annexed to The Bronx) from 1766 to 1775.

He was one of the signers of the White Plains Protest of April 1775 against all unlawful congresses and committees, and in many other ways proved himself a devoted loyalist. Seabury wrote the “Free Thoughts on the Proceedings of the Continental Congress” (1774) under the name ‘A. W. Farmer’ (a pen name and acronym for ‘a Westchester farmer’), which was followed by a second “Farmer’s Letter”, “The Congress Canvassed” (1774). Alexander Hamilton responded to these open letters in “A Full Vindication of the Measures of the Congress, from the Calumnies of their Enemies”. Seabury wrote a third “Farmer’s Letter” titled, “A View of the Controversy between Great Britain and her Colonies”, to answer Hamilton. Hamilton completed the exchange by writing “The Farmer Refuted” (1775).

These three “Farmer’s Letters” are forceful presentations of the loyalist claim, written in a plain, hard-headed style; their authorship was long in question, but it is certain that Seabury claimed them in England in 1783 when he was seeking episcopal consecration. At the same time he claimed the authorship of a letter, not signed by the Westchester farmer, which under the title “An Alarm to the Legislature of the Province of New York” (1775) discussed the power of this, the only legal political body in the colony. Seabury’s clarity of style and general ease of reading would set him apart from his ecclesiastical colleagues throughout his life. Seabury was arrested in November 1775 by local Patriots, and was kept in prison in Connecticut for six weeks. He was prevented from carrying out his ministry, and after some time in Long Island he took refuge in New York City, where in 1778 he was appointed chaplain to the King’s American Regiment. At the end of the war he stayed in the United States; he moved to Connecticut and was loyal to the new government.

On March 25, 1783, a meeting of ten Episcopal clergy in Woodbury, Connecticut, elected Seabury bishop as their second choice (a favorite son was elected first, but declined for health reasons). There were no Anglican bishops in the Americas to consecrate him, so he sailed to London on July 7. In England, however, his consecration was considered to be impossible because, as an American citizen, he could no longer take the oath of allegiance to the King. Seabury then turned to the Scottish Episcopal Church. At that time, the Episcopalians in Scotland were not the established church but a repressed church that refused to recognize the Hanoverian kings.

He was consecrated in Aberdeen on November 14, 1784, with the one condition that in the matter of the Holy Communion he study the Scottish Rite and work for its adoption rather than the English rite of 1662. To the present day the American liturgy adheres to the main features of this Rite in one of its Holy Eucharist Liturgies. Seabury was consecrated bishop by Robert Kilgour, Bishop of Aberdeen and Primus of Scotland; Arthur Petrie, Bishop of Ross and Moray; and John Skinner, Coadjutor Bishop of Aberdeen. The consecration took place in Bishop Skinner’s house in Longacre, approximately 500 metres from the present St Andrew’s Cathedral, Aberdeen. The chair on which Kilgour sat to perform the consecration is preserved in Holy Trinity Episcopal Church, Keith, Moray. The anniversary of his consecration is now a lesser feast day on the calendars of the Episcopal Church in the United States of America and the Anglican Church of Canada and other churches of the Anglican Communion.

Seabury’s consecration by the non-juring Scots caused alarm in the British Government who feared an entirely Jacobite church in the United States, and Parliament was persuaded to make provision for the ordination of foreign bishops. Seabury’s tenacity in the matter had the effect of making a continued relationship between the American and English churches a possibility. The problem was revealed not to be one of liturgical restrictions (the oath) but of political plans.

Seabury returned to Connecticut in 1785 and made New London his home, becoming rector of St James Church there. A meeting of his Connecticut clergymen was held during the first week of August 1785 at Christ Church on the South Green in Middletown. At the August 2nd reception of the bishop his letters of Consecration were requested, read, and accepted. On August 3, 1785 the first Anglican ordinations on American soil took place at Christ Church in Middletown. Four men, Henry Van Dyke, Philo Shelton, Ashbel Baldwin, and Colin Ferguson, were ordained to the Holy Order of Deacons that day. On August 7, 1785 Collin Ferguson was advanced to the Priesthood, and Thomas Fitch Oliver was admitted to the Diaconate. Bishop Seabury said of Christ Church, Middletown, “Long may this birthplace be remembered, and may the number of faithful stewards who follow this succession increase and multiply till time shall be no more”. Over the next 100 years there were 274 ordinations in Middletown. The validity of his consecration was at first questioned by some but was recognized by the General Convention of his church in 1789. In 1790 Seabury took charge of the Diocese of Rhode Island also. In 1792 he joined with Bishops William White and Samuel Provoost, who had received Church of England consecration in 1787, and James Madison (1749–1812), who had received English consecration in 1790, in the consecration of Bishop Thomas John Claggett of Maryland in 1792, thus uniting the Scottish and the English apostolic successions.

Seabury played a decisive role in the evolution of Anglican liturgy in North America after the Revolution. His “Communion Office,” published in New London in 1786, was based on the Scottish Book of Common Prayer rather than the 1662 liturgy in use in the Church of England. Seabury’s defense of the Scottish service—especially its restoration of the epiklesis or invocation of the Holy Spirit in the consecration of the Communion elements—influenced the first Book of Common Prayer adopted by the Episcopal Church in 1789. The English 1662 Prayer Book Prayer of Consecration ended with the Words of Institution; but the Scottish Rite continued from that point with a Prayer of Oblation based on the ancient classical models of Consecration Prayers found in Roman and Orthodox Christianity (this prayer in the English Rite had been detached and placed at the end of the service as a kind of Prayer of Thanksgiving for Communion in order to avoid the suggestion that the Holy Eucharist was a Sacrifice or Offering to God by his Church in union with Christ). Thus the Episcopal Church’s practice was brought closer to the tradition of the Roman church. In addition to the epiklesis Seabury argued for the restoration of another ancient custom; the weekly celebration of Holy Communion on Sunday rather than the infrequent observance that became customary in most Protestant churches after the Reformation. In “An Earnest Persuasive to Frequent Communion,” published in 1789 in New Haven, he wrote that “when I consider its importance, both on account of the positive command of Christ, and of the many and great benefits we receive from it, I cannot but regret that it does not make a part of every Sunday’s solemnity.” Seabury was ahead of his time, but two centuries later the custom of weekly Eucharist was rapidly spreading through many Anglican and other Protestant congregations under the impact of the Liturgical Movement.

In Cheshire in 1794, he established the Episcopal Academy of Connecticut, which later became Cheshire Academy.

He died in New London on 25 February 1796, where his remains lie in a small chapel at St. James. The church also features a stained glass window depicting his consecration in Scotland. Seabury’s portrait, by Ralph Earl, is in the collection of the National Portrait Gallery in Washington, D.C. A notable portrait hangs at the General Theological Seminary and a smaller painting is to be found at the College of Preachers on the grounds of the Washington National Cathedral.

Seabury was a superior organizer and a strict churchman. Seabury’s “Farmer’s Letters” rank him as the most vigorous American loyalist controversialist and, along with his prayers and devotional writings, one of the greatest masters of style of his period. His printed sermons and essays enjoyed wide readership well after his death.

Samuel Seabury was the first bishop consecrated for the Episcopal Church in the United States of America.

His brother David Seabury was a Loyalist who moved to Nova Scotia.

Seabury is commemorated in the Church of England on November 14 and his consecration is honored with a feast in the Episcopal Church (USA) on the same date. The observance is also found in other Anglican Churches including The Anglican Church of Canada Book of Alternative Services and the Scottish Episcopal Church [Revised Scottish Calendar, 1991].

Seabury Hall, at Trinity College in Hartford, Connecticut, is named after Samuel Seabury. An Episcopal seminary, Seabury-Western Theological Seminary, memorializes his honored position in the church. Bishop Seabury Academy in Lawrence, Kansas and Seabury Hall in Makawao, Hawaii are private schools, affiliated with the Episcopal Church that also honor Bishop Seabury in the naming of their schools.