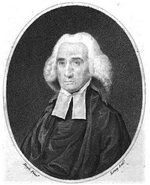 Dr. Samuel Stillman (1737–1807) was an American Baptist minister. Born in Philadelphia, Pennsylvania and raised in South Carolina, he married Hannah Morgan and took a pastorate in South Carolina for several years.

In 1764, Stillman joined the Reverend James Manning, the Reverend Ezra Stiles, the Reverend Isaac Backus, the Reverend John Gano, the Reverend Morgan Edwards, William Ellery, and former Royal Governors Stephen Hopkins and Samuel Ward among thirty-five others as an original fellow or trustee for the chartering of the College in the English Colony of Rhode Island and Providence Plantations (the original name for Brown University).

From 1765 Stillman was minister of the First Baptist Church of Boston, Massachusetts, until his death. John Hancock, although a Unitarian, was one of his admirers and often rented a pew there so that he could hear him. President John Adams and General Henry Knox also came to hear him preach.

In 1802, Samuel Stillman was instrumental in founding the first Baptist Missionary Society in America (now known as The American Baptist Churches of Massachusetts).