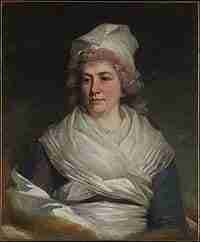 Sarah Franklin “Sally” Bache (September 11, 1744 – October 5, 1808) was the daughter of Benjamin Franklin and Deborah Read. She was a leader in relief work during the American Revolutionary War and frequently served as her father’s political hostess, as her mother had died in 1774.

Born Sarah Franklin and known as “Sally” throughout her life, she was the only surviving child of her parents, Deborah Read and Benjamin Franklin. Their son Francis Franklin died of smallpox at age four. Also in their household was her older half-brother William Franklin, her father’s illegitimate son whom her parents raised from infancy. She was carefully educated by her father about political life.

Sally married Richard Bache on October 29, 1767, although her family was worried about his financial position. The couple had eight children together:

Sarah Bache was an ardent Patriot during the American Revolutionary War. She did extensive relief work. After her father’s return in 1775 from a diplomatic mission to France, she frequently acted as his political hostess, as her mother had died in 1774.

She raised money for the Continental Army and is known for her involvement in the Ladies Association of Philadelphia. In 1780, under her leadership, the group made 2,200 shirts for the soldiers in the Continental Army at the army’s winter quarters at Valley Forge. The women often met to work together at The Cliffs, a country estate owned by Samuel R. Fisher on the Schuylkill River, two miles north of Philadelphia.

Bache loved music and reading, and was considered a skilled harpsichordist. When her father died in 1790, he left most of his estate to her. Among the items bequeathed to her was a small portrait of Louis XVI surrounded by diamonds, which she sold to finance a trip to London. In 1794, she and her family moved to a farm outside Philadelphia, to the north along the Delaware River.