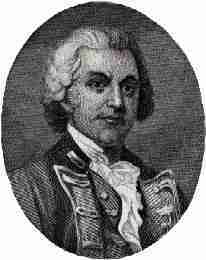 Talbot was born in Dighton, Massachusetts and came from a poor family. He first took to seafaring at the age of twelve serving as cabin boy in a coasting vessel. Talbot’s performance proved to be outstanding and in 1772 had saved up enough money to buy and settle a home in Providence, Rhode Island.

On June 28, 1775 Talbot received the commission of a captain in the 2nd Rhode Island Regiment. He was commissioned a captain in the Continental Army on July 1, 1775. After participating in the siege of Boston Talbot and the American Army began their march to New York. Along the way they stopped at New London whose port had just received Esek Hopkins who had just landed from a sailing exposition in the Bahamas. After learning that Hopkins was going to petition General Washington for 200 volunteers needed to assist his squadron in reaching Providence, Talbot volunteered his services in this effort.

After Talbot made his way back to New York where he aiding in the transportation of troops, he obtained command of a fire ship and attempted to use it to set fire to the British warship HMS Asia (1764) on September 14, 1776. The attempt failed, but the daring it displayed, and that Talbot was severely burned during the effort, won him a promotion to major on October 10, 1777 retroactive to September 1st.

After suffering a severe wound at Fort Mifflin, while fighting to defend Philadelphia, on October 23, 1777, Talbot returned to active service in the summer of 1778 and fought a the Battle of Rhode Island on August 28, 1778.

As commander of Pigot (which he had captured from the British), and later Argo, both under the Army, he cruised against Loyalist vessels that were harassing American trade between Long Island and Nantucket and made prisoners of many of them. On November 14, 1778 the Continental Congress passed a resolution which recognized his success in capturing the Pigot and promoted him to lieutenant colonel on the same date.

Because of his success fighting afloat for the Army, Congress made him a captain in the Continental Navy on September 17, 1779. However, since Congress had no suitable warship to entrust to him, Talbot put to sea in command of the privateer General Washington. In it, he took one prize, but soon thereafter ran into the British fleet off New York. After a chase, he struck his colors to Culloden, a 74-gun ship-of-the-line and remained a prisoner until exchanged for a British officer in December 1781.

After the war, Talbot settled in Johnstown, New York, the county seat of Fulton County, where he purchased the former manor house and estate of Sir William Johnson, founder of Johnstown. He was a member of the New York State Assembly in 1792 and 1792-93.

In January 1793, Talbot was elected as a Federalist to the 3rd United States Congress, and served from March 4, 1793, to June 5, 1794, when President George Washington chose him third in a list of six captains of the newly established United States Navy. He was ordered to superintend the construction of the frigate USS President at New York. In 1797, Talbot supervised the building of the USS Constitution, “Old Ironsides,” at the Charlestown Navy Yard in Boston, Massachusetts.

With the outbreak of the Quasi-War with France, Talbot was commissioned as a captain in the United States Navy on May 11, 1798. He served as commander of the USS Constitution from June 5, 1799 until September 8, 1801, sailing it to the West Indies where he protected American commerce from French privateers during the Quasi-War. He commanded the Santo Domingo Station in 1799 and 1800 and was commended by the Secretary of the Navy for protecting American commerce and for laying the foundation of a permanent trade with that country. It is said that Talbot was wounded 13 times and carried 5 bullets in his body.

Captain Talbot resigned from the Navy on September 21, 1801 and died in New York City on June 30, 1813. He was buried in Trinity Churchyard in lower Manhattan.