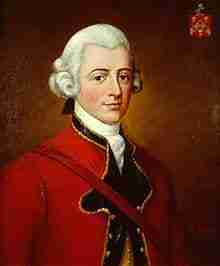 Sir Robert Eden, 1st Baronet, of Maryland, 23rd Proprietary Governor of Maryland (c. 1741 – 2 September 1784) was a British colonial official and the last Royal Governor of Maryland. Although a popular governor and an able administrator, Eden’s authority was overthrown by the events of the American Revolution, and in June 1776 he was invited by the Maryland Convention to leave for England. Eden was well-regarded at home and in the same year, 1776, he was made a baronet. He eventually returned to Maryland where he died in 1784 at the age of 43. He was buried in Annapolis and was succeeded in the baronetcy by his eldest son, Frederick, a noted author.

In 1763 Eden made an advantageous marriage, wedding the Hon. Caroline Calvert, daughter of Maryland’s proprietor Charles Calvert, 5th Baron Baltimore. In 1766 Caroline bore a son, Frederick. Three years later, in 1769, aged just 28, Robert Eden succeeded Horatio Sharpe as Governor of Maryland, the highest office in the Province. As Governor, Eden would attempt to maintain authority over the increasingly rebellious Province during the tumultuous years preceding the American Revolution.

===Maryland and the American War of Independence===

Eden was not among those who believed that coercion would force Marylanders into loyalty to the mother country. During the 1770s opposition to British taxation grew, and the Governor’s authority began to falter. On April 19, 1774 Eden was forced to prorogue the Colonial Assembly, the last occasion on which it would convene. {citation needed|date=August 2012} From this point on the government of Maryland was increasingly in the hands of the Revolutionaries. On October 19, 1774 the Peggy Stewart was burned in Annapolis harbour in protest against taxes on tea, in imitation of the famous Boston Tea Party, which took place on December 16, 1773. {citation needed|date=August 2012}

> “The spirit of resistance against the Tea Act, or any mode of internal taxation, is as strong and universal here as ever. I firmly believe that they will undergo any hardship sooner than acknowledge a right in the British Parliament in that particular, and will persevere in their non-importation and non-exportation experiments, in spite of every inconvenience that they must consequently be exposed to, and the total loss of their trade.”

Although Eden had some sympathy with the colonists’ grievances, he was firmly opposed to armed opposition to the Crown. In the event, Maryland was the only state that did not forcibly eject its last proprietary governor from office, choosing instead a formal and largely courteous transfer of power. By 1775 Eden’s authority had been effectively usurped by the Annapolis Convention and Eden was eventually asked by the Maryland Council of Safety to step down as governor. The Maryland Convention had been pressed by the Continental Congress (and the Virginians in particular) to arrest and detain Eden but they demurred, preferring to avoid such an “extreme” measure. Instead they argued that:

> “This Convention, and the Council of Safety for the time being, were the only proper and adequate judges of the propriety and expediency of suffering Governor Eden to depart out of this Province, and have proceeded in that matter upon evidence which was satisfactory to themselves, and to which the convention of Virginia were strangers”

Eventually the Maryland Convention formally asked the Governor to leave, and Governor Eden finally departed Maryland for England in the ship Fowey on June 23, 1776,.

He was created a baronet, of Maryland in North America, in 1776.

His son Sir Frederick Morton Eden, 2nd Baronet, of Maryland (1766–1809) was a pioneering writer and the author of The State of the Poor, published in 3 volumes in 1797.

Eden died in September 1784 and was buried in Annapolis, Maryland. He was succeeded in the baronetcy by his eldest son, Frederick. Eden was an ancestor of the 20th century British Prime Minister Anthony Eden.