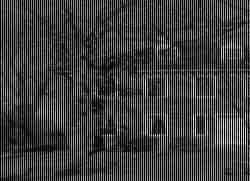 Stenton, also known as the James Logan Home, was the country home of James Logan, colonial Mayor of Philadelphia and Chief Justice of the Pennsylvania Supreme Court.

Stenton, which was named for Logan’s father’s Scottish birthplace, was built between 1723 and 1730 on {convert|511|acre|km2} as the country seat of James Logan, who was recognized in his lifetime as “a universal man in the Renaissance tradition.” Arriving in Philadelphia in 1699 as William Penn’s secretary, Logan occupied pivotal roles in the colony’s government—including that of chief justice of the Supreme Court and acting governor—for 50 years. He assembled one of the best libraries in colonial America, discovered the vital role of pollen in the fertilization of corn (an achievement that caused Linnaeus to consider him “among the demigods of science”), and amassed a fortune in the fur trade.

The building is of red brick, with dark headers. The roof atop its 2½ stories is hipped.

On James Logan’s death in 1751, Stenton was inherited by his son, William Logan (1717–1776). William used Stenton mainly as a summer residence, choosing to live in Philadelphia for the rest of the year. He also built the kitchen and added many fine furnishings.

On William’s death in 1776, Stenton was in turn inherited by his son, Dr. George Logan (1753–1821), a physician and later US Senator. The house figured in the 1777 Battle of Germantown, and served as headquarters of both General George Washington and British General Lord William Howe. George married Deborah Norris (1761–1839), a noted diarist and historian, and the person to whom Sally Wister’s Journal was written, in 1781. The mansion remained in the hands of the Logan family until 1910, when it was acquired by the City of Philadelphia.

Stenton, now open as a historic house museum, is an outstanding example of early American Georgian architecture. Stenton was designated a National Historic Landmark on January 12, 1965. The mansion lends its name to nearby Stenton Park and Stenton Avenue. The village of Stanton in Readington Township, New Jersey also borrows its name from the mansion.