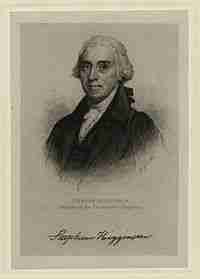 Stephen Higginson (November 28, 1743 – November 28, 1828) was an American merchant and shipmaster from Boston, Massachusetts. He was a delegate for Massachusetts to the Continental Congress in 1783. He took an active part in suppressing Shays’ Rebellion, was the author of the Laco letters (1789), and served the United States government as navy agent from May 11 to June 22, 1798. Although he was a privateer during the American Revolutionary War he became a “blue light”, extreme-Federalist during the War of 1812 and was one of the members of the Essex Junto.