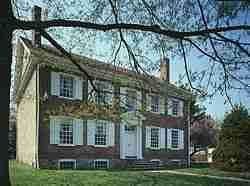 Summerseat, also known as George Clymer House, Thomas Barclay House, or Summerseat School is a site significant for its association with George Clymer and Robert Morris, both signers of the Declaration of Independence and the U.S. Constitution. It served as George Washington’s headquarters December 8–14, 1776.

The two-story brick and stone Georgian house was built in the 1770s for Thomas Barclay, a Philadelphia merchant and diplomat. From 1791 to 1798, the house was owned by Robert Morris, the namesake for Morrisville. In 1806 the house was acquired by Clymer, who resided there until his death in 1813.

The house was restored in 1931 and converted for use as a school administrative building in 1935.

It was declared a National Historic Landmark in 1965.

Summerseat is located on Hillcrest and Legion Avenues, and is owned and operated as a house museum by the Historic Morrisville Society. The house is open the first Saturday of each month from 10:00 a.m. to 1:00 p.m. There is no admission charge.