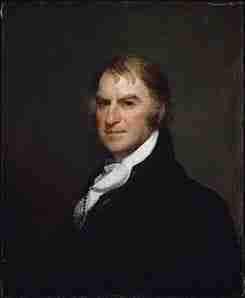 Theodore Sedgwick (May 9, 1746{spaced ndash}January 24, 1813) was an American attorney, politician and jurist, who served in elected state government and as a Delegate to the Continental Congress, a US Representative, and a United States Senator from Massachusetts. He served as the fifth Speaker of the United States House of Representatives. He was appointed to the Massachusetts Supreme Judicial Court in 1802 and served there the rest of his life.

His father was Benjaman Sedgwick (1716-1755). His paternal immigrant ancestor Major General Robert Sedgwick arrived in 1636 in the Massachusetts Bay Colony, as part of the Great Migration.

The younger Sedgwick attended Yale College, where he studied theology and law. He did not graduate, but went on to study law (“read law”) under the attorney Mark Hopkins of Great Barrington (He was the grandfather of the Mark Hopkins who later became president of Williams College.)

Sedgwick was admitted to the bar in 1766 and commenced practice in Great Barrington, Massachusetts. He moved to Sheffield. During the American Revolutionary War, he served in the Continental Army as a major, and took part in the expedition to Canada and the Battle of White Plains in 1776.

As a relatively young lawyer, Sedgwick and Tapping Reeve pled the case of Brom and Bett vs. Ashley (1781), an early “freedom suit”, in county court for the slaves Elizabeth Freeman (known as Bett) and Brom. Bett was a black slave who had fled from her master, Colonel John Ashley of Sheffield, Massachusetts, because of cruel treatment by his wife. Brom joined her in suing for freedom from the Ashleys. The attorneys challenged their enslavement under the new state constitution of 1780, which held that “all men are born free and equal.” The jury agreed and ruled that Bett and Brom were free. The decision was upheld on appeal by the state Supreme Court.

Bett marked her freedom by taking the name of Elizabeth Freeman, and she chose to work for wages at the Sedgwick household, where she helped rear their several children. She worked there for much of the rest of her life, buying a separate house for her and her daughter after the Sedgwick children were grown. The Sedgwicks had Freeman buried in their family plot. The family marked Freeman’s grave with an inscribed monument, and it is beside that of their daughter Catharine Maria Sedgwick.

A Federalist, Sedgwick began his political career in 1780 as a Delegate to the Continental Congress. He was elected as representative to the state house, and then as state senator.

In 1802, Sedgwick was appointed a justice of the Supreme Judicial Court of Massachusetts. He held this position until his death.

After his first wife died, Sedgwick married a second time on April 17, 1774 to Pamela Dwight of the New England Dwight family. She was born June 9, 1752 and died September 20, 1807, and was the daughter of Brigadier General Joseph Dwight of Great Barrington and his second wife, the widow Abigail Williams Sargent. Abigail was the daughter of Colonel Ephraim Williams, and half-sister of Ephraim Williams, Jr. the founder of Williams College.

The Sedgwicks had ten children, although three died within a year of birth, reflecting the high infant mortality of the time. They were:

After Pamela’s death, Sedgwick married his third wife Penelope Russell on November 7, 1808. The two remained married until Sedgwick’s death in 1813.

While on his death bed, Sedgwick converted to Unitarianism with his daughter Catharine Maria and William Ellery Channing in attendance. On January 24, 1813, Sedgwick died in Boston, Massachusetts at the age of 66. He was buried in Stockbridge, Massachusetts. His grave is at the center of the “Sedgwick Pie”.