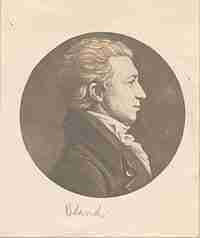 Theodorick Bland (March 21, 1741 – June 1, 1790), also known as Theodorick Bland, Jr., was a physician, soldier, and statesman from Prince George County, Virginia. He became a major figure in the formation of the new United States government, representing Virginia in both the Continental Congress and the United States House of Representatives.

Bland was born in Prince George County in 1741 to a prominent family in colonial Virginia. His parents were Theodorick Bland of Cawsons and Frances Elizabeth (Bolling) Bland. His mother was the only child and heir of Capt Drury Bolling and Elizabeth Meriweather of “Kippax,” which plantation the younger Theodorick subsequently inherited.

His grandfather, Richard Bland, had married Elizabeth Randolph, daughter of William Randolph of Turkey Island. His uncle, Richard Bland, his father’s first cousin Peyton Randolph, and his second cousin Thomas Jefferson would precede him in the Congresses. At the age of 12, Theodorick Bland, Jr. was sent to Great Britain for education. He studied first in Yorkshire, then went to Scotland to study medicine at the University of Edinburgh, graduating as a doctor in 1763.

That year Bland returned to Virginia and began a medical practice. He married Martha Daingerfield in 1768 and they likely settled at Kippax about that time. (His parents had moved to Cawsons.) With the inheritance of Kippax plantation, Bland became a planter and major slaveholder. Bland retired from medical practice in the late 1760s, “in favor of farming and politics”. He became active in politics before the war, serving as the Clerk of Prince George County.

As the Revolution neared, Bland’s Whig views aligned him with the rebels. In June 1776, he became a captain in the Virginia’s cavalry. He rose quickly to Colonel and commanded the 1st Continental Light Dragoons, often cited “Bland’s Virginia Horse” in Revolutionary dispatches and correspondence.(see The Bland Papers and correspondence between him and George Washington). In the latter capacity he reported directly to Gen. Washington. He retired in 1779 from active cavalry service due to poor health, which he had suffered from his youth.

At the request of Gen. Washington, Bland then served as Warden at Charlottesville over British officers taken prisoner. He also worked to keep Washington’s officers and cavalry supplied with quality horses both from his own stables and from others. As a participant in the early American horse-racing community, Bland owned a large stable and had access to others among his relatives and friends.

Bland’s observations at Brandywine supplied General Washington with the correct location of Lord Cornwallis’ and Howe’s main armies; Bland wrote two separate dispatches and Col James Ross of the 8th Pennsylvania wrote another dispatch reporting on the British. Both men’s dispatches supported that of Col Hazen. Their dispatches were not interpreted accurately in sorting the British troop movements until it was almost too late. Without the accurate contributions of Bland, Ross and Hazen, a worse result might have befallen Washington’s army at Brandywine.

Some later accounts have Bland’s Virginia Horse subsequently assigned to scouting duty. In his 1922 biography of John Randolph, the historian William Cabell Bruce suggested that the Brandywine incident encouraged Washington to use his cavalries more for scouting rather than sitting in formation on the front lines, as they had at Brandywine. Perhaps that shift is what led some to later speculate that Bland’s unit was “subsequently relegated to scouting duty”. It was the lack of scouting that led to the Brandywine errors. In 1779, Bland returned to Virginia, where for a few months he commanded the prisoner-of-war post at Charlottesville before being allowed to retire from military duty. He had requested this for some time from Washington due to his poor health. He had retired from his active medical practice for the same health issues in the late 1760s, nearly a decade before the war had begun.

Bland’s political career began before the Revolution, when he served as the Clerk of Prince George County, and had a great deal of contact with the House of Burgesses. As a planter, he cultivated tobacco, indigo and wheat.

Following the war, he continued as Clerk of the county, maintaining contact with the Virginia House of Delegates. In 1780, that house named him as a delegate to the Continental Congress, where Bland served until 1783. He helped form the new United States government. After his father moved to Amelia County, Bland took over Cawsons (apparently about 1783-1784 after his return to Virginia from the Continental Congress and his father’s death.) He operated Kippax as an out-plantation. In 1786, Bland was elected to the Virginia House, where he served until 1788. In 1788, he was appointed as a delegate to the Virginia Convention called to ratify the United States Constitution. Bland was opposed to ratification, as he believed it yielded too much power to a central government.

After the constitution was adopted, Bland was elected to the First United States Congress. He served in the House of Representatives from March 4, 1789 until his death in 1790 at the age of 49. He died while attending the Congress in New York City. Bland was the first member of Congress to die in office. William Branch Giles completed his term.

Bland was originally buried in New York’s Trinity Churchyard in Lower Manhattan. (Trinity Church is a National Historic Landmark). In 1828, his remains were moved and reinterred in the Congressional Cemetery in Washington, D.C..

His wife Martha Bland survived him and married two more times. She was an independent woman, maintaining the Bland holdings by executing marriage contracts to control her own lands.