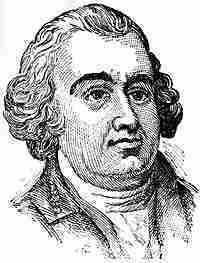 Thomas Burke (c. 1747{spaced ndash}December 2, 1783) was an Irish physician, lawyer, and statesman who lived in Hillsborough, North Carolina. He represented North Carolina as a delegate to the Continental Congress and was the third Governor of the state.

Burke was born in Galway, Ireland around 1747. By 1764 he had emigrated. Thomas went to Virginia and practiced medicine for a number of years. He studied law, and began its practice in Norfolk, Virginia. He became an early supporter of the American Revolution, writing tracts in opposition to the Stamp Act. In 1774 he moved to Hillsborough, North Carolina.

Burke’s neighbors made him a member of the provisional or rebel government that met in convention at Halifax in 1776. There he had a part in the debate that led to North Carolina’s new constitution. He was chosen as a delegate to the Continental Congress on December 20, 1776 and arrived in Philadelphia to take his seat on February 4, 1777. He was a strong state’s rights advocate, although he moderated this view somewhat by 1781. In September 1777 most of the Congress were preparing to flee Philadelphia as the British advanced. Burke instead went to join General Nash’s North Carolina troops defending the city. He was present at the Battle of Brandywine before rejoining the Congress.

Burke served in Congress until 1781, when he was chosen to be Governor of North Carolina. He returned home to assume that office in June. As governor he was active in supporting and encouraging the militia in its resistance to British and Tory forces. Then, in September, he was captured by Tories under the command of Col. David Fanning, and after a failed rescue attempt by patriot militia under the command of John Butler at the Battle of Lindley’s Mill, Burke was imprisoned by the British Army on James Island near Charleston, South Carolina.

Burke was allowed to live freely on the island under parole, but he was subject to mistreatment and deplorable conditions, and he feared assassination. Finally, on January 16, 1782, he escaped and made his way to North Carolina. He wrote to the British that he still considered himself under the terms of his parole. He resumed his duties as governor prior to being released from parole through exchange. Accordingly, many North Carolinians and Continental officers considered that he had broken his word, and he remained under a cloud of dishonor. In April 1782 he did not stand for the governorship and was succeeded by Alexander Martin.

Burke’s health never recovered from his term of imprisonment. He retired to his home, known as ‘Tyaquin, in Orange County. He died there on December 2, 1783, and was buried on his plantation near Hillsborough. The gravesite is approximately 350 feet north of what is now Governor Burke Road.

It has been claimed that Burke was a practicing Roman Catholic who succeeded politically in an era when Catholics held little political power and were often discriminated against. No contemporary evidence of Burke’s Catholicism exists, and he did not write about it himself.

Burke County, North Carolina is named for him.