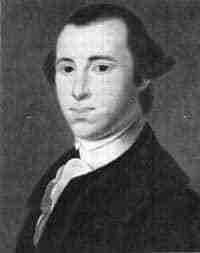 Thomas Heyward, Jr. (July 28, 1746 – March 6, 1809) was a signer of the United States Declaration of Independence and of the Articles of Confederation as a representative of South Carolina.

He was born in St. Luke’s Parish (now known as Jasper County), South Carolina and educated at home, then traveled to England to study law where he was a member of the Honourable Society of the Middle Temple. He was elected to the Continental Congress in 1775 and signed the Declaration of Independence in 1776.

Heyward returned to South Carolina in 1778 to serve as a judge. In command of a militia force, he was taken prisoner by the British during the siege of Charleston. He continued to serve as a judge after the war, retiring from the bench in 1798.

Judge Heyward was married twice, at age 26 and at age 40, and each wife was named Elizabeth. The first Elizabeth, daughter of Col. John and Sarah Gibbes Matthews, born 1753, and whose brother, John, was Governor of South Carolina, died in childbirth in 1782 in Philadelphia, where she had gone to be with him upon his release as a prisoner of war. She is buried there in St. Peter’s Episcopal Church yard. They had six children, but only one son, Daniel, survived childhood. The second Elizabeth, 1769-1833, daughter of Col. Thomas and Mary Elliott Savage of Charleston, S.C., had three children to live to adulthood, Thomas, William and Elizabeth. There are a number of descendants today in the 21st century surviving his four children. Notable descendants include Duncan Clinch Heyward, twice elected Governor of South Carolina (1903–07) and 1937 published author of “Seed of Madagascar”, which relates the story of his rice-planting family; and DuBose Heyward, whose 1920’s novel and later stage play “Porgy”, portrayed blacks without condescension, and was transformed by George Gershwin into the popular opera “Porgy and Bess”, an American musical masterpiece.