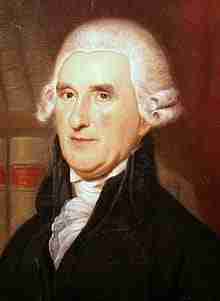 McKean was born in New London Township, Chester County, Pennsylvania, the son of William McKean and Letitia Finney. His father was a tavern-keeper in New London and both his parents were Irish-born Ulster-Scots who came to Pennsylvania as children. Mary Borden was his first wife. They married in 1763, lived at 22 The Strand in New Castle, Delaware. They had six children: Joseph, Robert, Elizabeth, Letitia, Mary, and Anne. Mary Borden McKean died in 1773 and is buried at Immanuel Episcopal Church in New Castle. Sarah Armitage was McKean’s second wife. They married in 1774, lived at the northeast corner of 3rd and Pine Streets in Philadelphia, Pennsylvania, and had four children, Sarah, Thomas, Sophia, and Maria. They were members of the New Castle Presbyterian Church in New Castle and the First Presbyterian Church in Philadelphia. Sarah’s son, Carlos Martínez de Irujo, 2nd Marquis of Casa Irujo, would later become Prime Minister of Spain.

McKean’s education began at the Reverend Francis Allison’s New London Academy. At the age of sixteen he went to New Castle, Delaware to begin the study of law under his cousin, David Finney. In 1755 he was admitted to the Bar of the Lower Counties, as Delaware was then known, and likewise in the Province of Pennsylvania the following year. In 1756 he was appointed deputy Attorney General for Sussex County. From the 1762/63 session through the 1775/76 session he was a member of the General Assembly of the Lower Counties, serving as its Speaker in 1772/73. From July 1765, he also served as a judge of the Court of Common Pleas and began service as the customs collector at New Castle in 1771. In November 1765 his Court of Common Pleas became the first such court in the colonies to establish a rule that all the proceedings of the court be recorded on un-stamped paper.

Eighteenth century Delaware was politically divided into loose political factions known as the “Court Party” and the “Country Party.” The majority Court Party was generally Anglican, strongest in Kent and Sussex counties and worked well with the colonial Proprietary government, and was in favor of reconciliation with the British government. The minority Country Party was largely Ulster-Scot, centered in New Castle County, and quickly advocated independence from the British. McKean was the epitome of the Country party politician and was, as much as anyone, its leader. As such, he generally worked in partnership with Caesar Rodney from Kent County, and in opposition to his friend and neighbor, George Read.

At the Stamp Act Congress of 1765, McKean and Caesar Rodney represented Delaware. McKean proposed the voting procedure that the Continental Congress later adopted: that each colony, regardless of size or population, have one vote. This decision set the precedent, the Congress of the Articles of Confederation adopted the practice, and the principle of state equality continued in the composition of the United States Senate.

McKean quickly became one of the most influential members of the Stamp Act Congress. He was on the committee that drew the memorial to Parliament, and with John Rutledge and Philip Livingston, revised its proceedings. On the last day of its session, when the business session ended, Timothy Ruggles, the president of the body, and a few other more cautious members, refused to sign the memorial of rights and grievances. McKean arose and addressing the chair insisted that the president give his reasons for his refusal. After refusing at first, Ruggles remarked, “it was against his conscience.” McKean then disputed his use of the word “conscience” so loudly and so long that a challenge was given by Ruggles and accepted in the presence of the congress. However, Ruggles left the next morning at daybreak, so that the duel did not take place.

A few days after McKean cast his vote, he left Congress to serve as colonel in command of the Fourth Battalion of the Pennsylvania Associators, a militia unit created by Benjamin Franklin in 1747. They joined Washington’s defense of New York City at Perth Amboy, New Jersey. Being away, he was not available when most of the signers placed their signatures on the Declaration of Independence on August 2, 1776. Since his signature did not appear on the printed copy that was authenticated on January 17, 1777, it is assumed that he signed after that date, possibly as late as 1781.

In a conservative reaction against the advocates of American independence, the 1776/77 Delaware General Assembly did not reelect either McKean or Caesar Rodney to the Continental Congress in October 1776. However, the British occupation following the Battle of Brandywine swung opinions enough that McKean was returned to Congress in October 1777 by the 1777/78 Delaware General Assembly. He then served continuously until February 1, 1783. McKean helped draft the Articles of Confederation and voted for their adoption on March 1, 1781.

When poor health caused Samuel Huntington, to resign as President of Congress in July 1781, McKean was elected as his successor. He served from July 10, 1781, until November 4, 1781. The President of Congress was a mostly ceremonial position with no real authority, but the office did require McKean to handle a good deal of correspondence and sign official documents. During his time in office, Lord Cornwallis’s British army surrendered at Yorktown, effectively ending the war.

Meanwhile, McKean led the effort in the General Assembly of Delaware to declare its separation from the British government, which it did on June 15, 1776. Then, in August, he was elected to the special convention to draft a new state constitution. Upon hearing of it, McKean made the long ride to Dover, Delaware from Philadelphia in a single day, went to a room in an Inn, and that night, virtually by himself, drafted the document. It was adopted September 20, 1776. The Delaware Constitution of 1776 thus became the first state constitution to be produced after the Declaration of Independence.

McKean was then elected to Delaware’s first House of Assembly for both the 1776/77 and 1778/79 sessions, succeeding John McKinly as Speaker on February 12, 1777 when McKinly became President of Delaware. Shortly after President McKinly’s capture and imprisonment, McKean served as the President of Delaware for a month from September 22, 1777 until October 20, 1777. That was the time needed for the rightful successor to John McKinly, the Speaker of the Legislative Council, George Read, to return from the Continental Congress in Philadelphia and assume the duties.

At this time, immediately after the Battle of Brandywine, the British Army occupied Wilmington and much of northern New Castle County. Its navy also controlled the lower Delaware River and Delaware Bay. As a result the state capital, New Castle, was unsafe as a meeting place, and the Sussex County seat, Lewes, was sufficiently disrupted by Loyalists that it was unable to hold a valid general election that autumn. As President, McKean was primarily occupied with recruitment of the militia and with keeping some semblance of civic order in the portions of the state still under his control.

McKean started his long tenure as Chief Justice of Pennsylvania on July 28, 1777 and served in that capacity until 1799. There he largely set the rules of justice for revolutionary Pennsylvania. According to biographer John Coleman, “only the historiographical difficulty of reviewing court records and other scattered documents prevents recognition that McKean, rather than John Marshall, did more than anyone else to establish an independent judiciary in the United States. As chief justice under a Pennsylvania constitution he considered flawed, he assumed it the right of the court to strike down legislative acts it deemed unconstitutional, preceding by ten years the U.S. Supreme Court’s establishment of the doctrine of judicial review. He augmented the rights of defendants and sought penal reform, but on the other hand was slow to recognize expansion of the legal rights of women and the processes in the state’s gradual elimination of slavery.”

He was a member of the convention of Pennsylvania, which ratified the Constitution of the U.S. In the Pennsylvania State Constitutional Convention of 1789/90, he argued for a strong executive and was himself at that time a Federalist. Nevertheless, in 1796, dissatisfied with Federalist domestic policies and compromises with England, he became an outspoken Jeffersonian Republican or Democratic-Republican.

McKean was elected Governor of Pennsylvania, and served three terms from December 17, 1799 until December 20, 1808. In 1799 he defeated the Federalist Party nominee, James Ross, and again more easily in 1802. At first, McKean ousted Federalists from state government positions. Because of that he has been called the father of the spoils system. However, in seeking a third term in 1805, McKean was at odds with factions of his own Democratic-Republican Party and the Pennsylvania General Assembly instead nominated Speaker Simon Snyder for Governor. McKean then forged an alliance with Federalists, called “the Quids,” and defeated Snyder. Afterwards, he began removing Jeffersonians from state positions.

The governor’s beliefs in strong executive and judicial powers were bitterly denounced by the influential Aurora newspaper publisher, William Duane, and the Philadelphia populist, Dr. Michael Leib. After they led public attacks calling for his impeachment, McKean filed a partially successful libel suit against Duane in 1805. The Pennsylvania House of Representatives impeached the governor in 1807, but his friends prevented a trial for the rest of his term and the matter was dropped. When the suit was settled after McKean left office, his son Joseph angrily criticized Duane’s attorney for alleging, out of context, that McKean referred to the people of Pennsylvania as “Clodpoles” (clodhoppers).

Some of McKean’s other accomplishments included expanding free education for all and, at age eighty, leading a Philadelphia citizens group to organize a strong defense during the War of 1812. He spent his retirement in Philadelphia, writing, discussing political affairs and enjoying the considerable wealth he had earned through investments and real estate.

McKean was a member of the Pennsylvania Society of the Cincinnati in 1785 and was subsequently its vice-president. Princeton College gave him the degree of L.L.D. in 1781, Dartmouth College presented the same honor in 1782, and the University of Pennsylvania gave him the degree of A.M. in 1763 and L.L.D. in 1785. With Professor John Wilson he published “Commentaries on the Constitution of the United States” in 1790.

McKean died in Philadelphia and was buried in the First Presbyterian Church Cemetery there. In 1843, his body was moved to the Laurel Hill Cemetery, also in Philadelphia. McKean County, Pennsylvania is named in his honor, as is Thomas McKean High School in New Castle County, also McKean Street in Philadelphia, and the McKean Hall dormitory at the University of Delaware. Penn State University also has a residence hall and a campus road named for him.

McKean was over six feet tall, always wore a large cocked hat and carried a gold-headed cane. He was a man of quick temper and vigorous personality, “with a thin face, hawk’s nose and hot eyes.” John Adams described him as “one of the three men in the Continental Congress who appeared to me to see more clearly to the end of the business than any others in the body.” As Chief Justice and Governor of Pennsylvania he was frequently the center of controversy.

In the Broadway musical, 1776, McKean is portrayed as a gun-toting, cantankerous old Scot who cannot get along with the wealthy and conservative planter George Read.{citation needed|date=July 2012} This is actually close to the truth (minus the gun toting) as McKean and Read belonged to opposing political factions in Delaware.{citation needed|date=July 2012} McKean was portrayed by Bruce MacKay in the original Broadway Cast and Ray Middleton in the film version.

Delaware elections were held October 1 and members of the General Assembly took office on October 20 or the following weekday. State Assemblymen had a one-year term. The whole General Assembly chose the Continental Congressmen for a one-year term and the State President for a three-year term. Judges of the Courts of Common Pleas were also selected by the General Assembly for the life of the person appointed. McKean served as State President only temporarily, filling the vacancy created by John McKinly’s capture and resignation and awaiting the arrival of George Read.