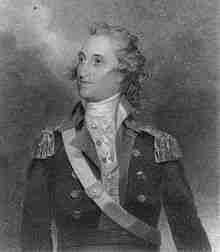 Thomas Pinckney (October 23, 1750 – November 2, 1828) was an early American statesman, diplomat and veteran of both the American Revolutionary War and the War of 1812.

==Early life in the military==

Pinckney was born in Charleston, South Carolina, where his father, Charles Pinckney, was a prominent colonial official. When Pinckney was 3, his father brought the family to Great Britain on colonial business, and after his father’s death in 1758, Pinckney continued his education in Great Britain (at Westminster School and Christ Church, Oxford) and France. He returned to South Carolina in 1774 and became an ardent Patriot in the American Revolution. In 1775 he was commissioned as captain in the 1st South Carolina Regiment of the Continental Army. After seeing much action, he became an aide-de-camp to General Horatio Gates, and was captured by the British at the disastrous Battle of Camden in 1780. After recovering from his wounds, he was released in a prisoner exchange. In 1781 he fought under Lafayette in Virginia.

After the war, Pinckney spent some years running his plantations before he returned to politics. Pinckney was the 36th Governor of South Carolina from 1787 to 1789, most notably presiding over the state convention that ratified the new U.S. Constitution, and then served in the South Carolina House of Representatives in 1791. He was appointed by President George Washington to be the U.S. minister (ambassador) to Great Britain in 1792. While there, he was unable to get British concessions on issues such as impressment or the Northwest frontier forts, so that Washington sent John Jay as a special envoy to negotiate the controversial Jay Treaty. For part of his tenure (1794–1795) as ambassador in Britain, Pinckney also served as Envoy Extraordinary to Spain. He arranged the Treaty of San Lorenzo, also known as Pinckney’s Treaty, with Spain in 1795.

Pinckney was elected to the United States House of Representatives from South Carolina to fill the vacancy caused by the resignation of William L. Smith, and he served from November 1797 to March 1801. While in Congress, Pinckney served as one of the managers appointed by the House in 1798 to conduct the impeachment proceedings against William Blount.

Pinckney served as a major general in the United States Army during the War of 1812. His last public role before his death in Charleston was as president general of the Society of the Cincinnati (1825–1828).

Pinckney died in Charleston, South Carolina and is interred in St. Philip’s Churchyard.

Pinckneyville, Georgia was named after Thomas Pinckney after he traveled through the area. That town no longer exists, as its residents left to found the nearby Norcross. Pinckneyville is the name of a Middle School in Norcross.

His father, Charles Pinckney, was Chief Justice of South Carolina and his mother, Eliza Lucas, was prominent for introducing the cultivation of Indigo to the colonies.

His brother Charles Cotesworth Pinckney and his cousin Charles Pinckney were signers of the United States Constitution.

He was married twice, first to Elizabeth Motte and second to her sister, Frances, the widow of John Middleton, a cousin of Arthur Middleton. Both Elizabeth and Frances were daughters of Rebecca Brewton Motte. From at least 1801 through 1825, he made his home with Frances Pinckney at 14 George St., Charleston, South Carolina in what is now known as the Middleton-Pinckney House.