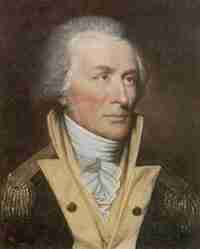 Thomas Sumter (August 14, 1734–June 1, 1832) was a planter; a soldier in the Colony of Virginia militia; a brigadier general in the South Carolina militia during the American War of Independence, and a politician. He was elected to the United States House of Representatives and to the United States Senate, where he served from 1801-1810, when he retired. Sumter was nicknamed the “Carolina Gamecock,” for both his fierce fighting style and his attack on British soldiers after they burned down his house during the Revolution.

Thomas Sumter was born in Hanover County, Province of Virginia. His father, William Sumter, was an immigrant from Wales who operated a mill. Given only a rudimentary education, Sumter enlisted in the Virginia militia.

In 1761, Sumter was invited to join an expedition (known as the Timberlake Expedition) organized by Colonel Adam Stephen to visit the Overhill Cherokee (in present-day Tennessee) to verify that war with the Cherokee had ended in the Virginia back-country. Stephen gave command of the expedition to Henry Timberlake, who had volunteered for the assignment. Timberlake was accompanied by then Sergeant Sumter, an interpreter named John McCormack, and an unknown servant. The group purchased a canoe and ten days’ worth of provisions with money Sumter had borrowed. The plan was to follow the Holston River to its confluence with the French Broad River, and proceed to the Little Tennessee River, where the Overhill towns were situated.

Timberlake’s party left Long Island (Tennessee) on November 28, 1761. The Holston River’s unusually low water levels slowed their progress, as the party had to drag or portage the canoe over and around exposed shoals and sandbars. They ran out of provisions after several days, but McCormack managed to shoot a bear, supplying them with several days’ worth of meat. Around December 7, the party explored a stalactite-filled cave situated approximately {convert|50|ft|m} above the river. Timberlake described Sumter’s swimming nearly a half-mile in the icy waters to retrieve their canoe, which had drifted away while they were exploring the cave.

On December 13, the expedition reached a series of cascades which Timberlake called “Great Falls.” The party spent a day maneuvering their way down the cascades but found the Holston frozen over immediately downstream. The ice slowed them more, but rains on the night of December 14 thawed the ice, and the party passed out of the mouth of the Holston (in modern Knoxville) into what is now the Tennessee River on December 15.

The expedition traveled more quickly on the Tennessee River. A hunting party led by the Cherokee chief, Slave Catcher, met the party near the mouth of the Little Tennessee River, and supplied the weary expedition with provisions of “dried venison, homminy, and boiled corn.” The following day Slave Catcher guided the expedition up the Little Tennessee, although the colonial party struggled to keep up, with Timberlake recalling, “my hands were so galled, that the blood trickled from them, and when we set out the next morning I was scarce able to handle a pole.” The Timberlake party arrived in the Overhill town of Tomotley on December 20, where they were greeted by the town’s head man, Chief Ostenaco.

After spending several days in Tomotley as guests of Ostenaco, they proceeded to the Overhill mother town of Chota, where a number of chiefs had gathered in the town’s large council-house. Ostenaco gave a speech and ceremoniously buried a hatchet in the ground, symbolizing a state of peace between the English and the Cherokee. Timberlake smoked several ceremonial peace pipes with the gathered chiefs. He described it in his memoir as “very disagreeable,” but respected the ritual with the chiefs.

The party continued southward to Citico, where Timberlake was greeted with a ceremonial dance involving some 400 Cherokee. Timberlake recalled that the dancers were “painted all over in a hideous manner” and that they “danced in a very uncommon figure.” The town’s chief, Cheulah, presented Timberlake with a string of beads and held another pipe-smoking ceremony. The non-stop pipe smoking made Timberlake so sick that he “could not stir for several hours.” The following day, Timberlake and Ostenaco traveled to Chilhowee, the second southernmost of the Overhill towns on Timberlake’s map, where the town’s chief, Yachtino, held a peace procession similar to that held at Citico.

The assignment largely completed, the party returned to Tomotley with Ostenaco on January 2, 1762. Timberlake spent the next few weeks studying Cherokee habits and making notes for his map of the Overhill country. At the end of January, rumors began trickling in from Cherokee scouts of renewed hostilities with rival tribes to the north. Although the rumors turned out to be based on a misunderstanding, Timberlake nevertheless grew anxious and begged Ostenaco to guide him back to Virginia. Ostenaco reluctantly agreed, and the party set out on March 10, 1762. Just before departure, Timberlake witnessed the ceremonial return of a war party led by Chief Willinawaw. The party sang “the war-song” and planted a scalp-filled pole next to the council-house door.

The Timberlake party had decided to make the return trip overland, having purchased horses from the Cherokee. Ostenaco, accompanied by several hundred Cherokee warriors, guided the Timberlake group northward along what is now known as the Great Indian Warpath, which follows the western base of the Appalachian Mountains. On March 11, the party arrived at the abandoned village of Elajoy along the Little River in what is now Maryville, and crossed the French Broad River the following day. A week later, they reached Fort Robinson, which the Stephen garrison had abandoned but had left behind a large supply of flour. The expedition left Long Island-on-the-Holston on March 22, continuing northward to an abandoned army camp. Timberlake was disappointed to find that his belongings had been looted from a trunk. The party finally arrived in Williamsburg in early April.

While in Williamsburg, Timberlake and Ostenaco attended a dinner party at William & Mary College at which Ostenaco professed his desire to meet the king of England. Although he feared the trip would break him financially, Timberlake agreed. In May 1762, Timberlake, Sumter, and three distinguished Cherokee leaders, including Ostenaco, departed for London.

Arriving in early June, the Cherokee were an immediate attraction, drawing crowds all over the city. The poet Oliver Goldsmith waited for three hours to meet the Cherokee, and offered a gift to Ostenaco. They sat for Sir Joshua Reynolds to take their portraits, and they met personally with King George III. The Cherokee returned to North America with Sergeant Sumter on about August 25, 1762.

Upon returning to the colonies, Sumter became stranded in South Carolina due to financial difficulties. He petitioned the colony for reimbursement of his travel expenses, but was denied. He was subsequently imprisoned for debt in Virginia. When his friend and fellow soldier Joseph Martin arrived in Staunton, Martin asked to spend the night with Sumter in jail. Martin gave Sumter 10 guineas and a tomahawk. Sumter used the money to buy his way out of jail in 1766. When Martin and Sumter were reunited some 30 years later, Sumter repaid the money.

Sumter settled in Stateburg in the High Hills of Santee in the Claremont (later Sumter) District. He married Mary Jameson in 1767, and together they opened several small businesses and became successful plantation owners. Due to his wealth and the respect in the community, he was able to form a local militia group.

In February 1776, Sumter was elected lieutenant colonel of the Second Regiment of the South Carolina Line of which he was later appointed colonel. He subsequently was appointed brigadier general, a post he held until the end of the war. He participated in several battles in the early months of the war, including the campaign to prevent an invasion of Georgia. Perhaps his greatest military achievement was his partisan campaigning, which contributed to Lord Cornwallis’ decision to leave the Carolinas for Virginia.

Sumter acquired the nickname, “Carolina Gamecock,” during the American Revolution for his fierce fighting tactics. A British General commented that Sumter “fought like a gamecock”, and Cornwallis paid him the finest tribute when he described the Gamecock as his greatest plague.

After the Revolution, Sumter was elected to the U. S. House of Representatives, serving from March 4, 1789–March 4, 1793 and from March 4, 1797–December 15, 1801. He was later selected by the legislature to fill the vacancy caused by the resignation of Senator Charles Pinckney. Sumter served in the Senate until his retirement on December 16, 1810.

Sumter died on June 1, 1832 at South Mount, his plantation near Stateburg, at the age of 97 years.

* Fort Sumter in Charleston harbor was named for Sumter after the War of 1812. The fort is best known as the site upon which the shots initiating the American Civil War were fired, at the Battle of Fort Sumter.