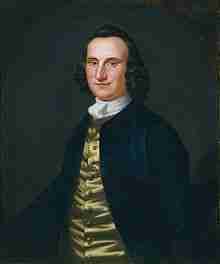 Thomas Willing (December 19, 1731 – January 19, 1821) was an American merchant and financier and a Delegate to the Continental Congress from Pennsylvania.

Thomas Willing was born in Philadelphia, the son of Charles Willing, who twice served as mayor of Philadelphia, and Anne Shippen, granddaughter of Edward Shippen, who was the second mayor of Philadelphia. Thomas completed preparatory studies in Bath, England, then studied law in London at the Inner Temple. In 1749, he returned to Philadelphia, where he engaged in mercantile pursuits, in partnership with Robert Morris, until 1793.

A member of the common council in 1755, he became an alderman in 1759, associate justice of the city court on October 2, 1759, and then justice of the court of common pleas February 28, 1761. Willing then became Mayor of Philadelphia in 1763. In 1767, the Pennsylvania Assembly, with Governor Thomas Penn’s assent, had authorized a Supreme Court justice (always a lawyer) to sit with local justices of the peace (judges of county courts, but laymen) in a system of Nisi Prius courts. Governor Penn appointed two new Supreme Court justices, John Lawrence and Thomas Willing. Willing served until 1767, the last under the colonial government.{rp|52}

In 1763, Willing married Anne McCall. They had thirteen children. Their eldest daughter, Anne Willing, was a prominent socialite and married one of the richest men in America at that time, William Bingham. Another daughter, Mary Willing married Henry Clymer. Other daughters married William Jackson, Thomas Willing Francis (a cousin), and Richard Peters.

Willing died in 1821 in Philadelphia, where he is interred in Christ Church Burial Ground.