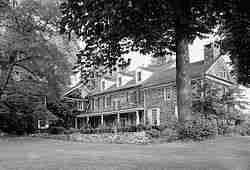 Waynesborough, also known as Gen. Anthony Wayne House, was the home of American Revolutionary War general Anthony Wayne (1745-1796). He lived there for all his life except his last 5 years.

It was declared a National Historic Landmark in 1972.

The Philadelphia Society for the Preservation of Landmarks (Landmarks) offers tours of Waynesborough from mid-March through December on Wednesday through Sunday from 1-3 p.m.

Many buildings near the Waynesborough home have been named after it.