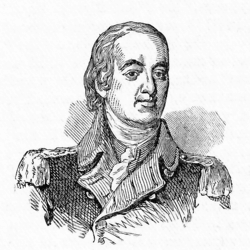 William Alexander (aka Lord Stirling) (1726 New York City – 15 January 1783), who claimed the disputed title of Earl of Stirling, was an American major-general during the American Revolutionary War.

Alexander was an educated, ambitious and bright young man and was proficient in mathematics and astronomy. He joined his mother in a successful provisioning business and, in 1747, married Sarah Livingston, the daughter of Philip Livingston (1686-1749) and sister of Governor William Livingston. The couple had two daughters and one son William. One of his daughters, Mary Alexander, would marry wealthy merchant, Robert Watts of New York.

Stirling was a socially prominent and wealthy man, having inherited a large fortune from his father. He dabbled in mining and agriculture and lived a life filled with the trappings befitting a Scottish Lord. This was an expensive lifestyle and he eventually went into debt to finance it. He began building his grand estate in the Basking Ridge section of Bernards Township, New Jersey and upon its completion, sold his home in New York and moved there. George Washington was a guest there on several occasions during the revolution and gave away Stirling’s daughter at her wedding. In 1767, the Royal Society of Arts awarded Lord Stirling a gold medal for accepting the society’s challenge to establish viticulture and winemaking in the North American colonies by cultivating 2,100 grape (V. vinifera) vines on his New Jersey estate.

When the American Revolutionary War began, Stirling was made a colonel in the New Jersey militia. He outfitted the militia at his own expense and was always willing to spend his own money in support of the cause. He distinguished himself early by leading a group of volunteers in the capture of an armed British transport.

Congress appointed him brigadier general in the Continental Army in March 1776. At the Battle of Long Island, in August of that year, Stirling led the 1st Maryland Regiment in repeated attacks against a superior British force at the Old Stone House near what is today named the Gowanus Canal and took heavy casualties. Outnumbered 25-1, his brigade was eventually overwhelmed and Stirling was taken prisoner, but not before repelling the British forces long enough to allow the main body of troops to escape to defensive positions at Brooklyn Heights. Because of his actions at Long Island, one newspaper called him “the bravest man in America” and he was praised by both Washington and the British for his bravery and audacity.

He was released in a prisoner exchange (in return for governor Montfort Browne), promoted to major general, and became one of Washington’s most able and trusted generals. Washington held him in such high regard that he placed Stirling in command of the entire Continental Army for nearly two months, while he was away on personal business and throughout most of the war he was considered to be 3rd or 4th in rank behind Washington. Though he cast his lot with the Patriot cause during the American Revolution, officers (including Washington) and men alike often referred to him as Lord Stirling. At Trenton he received the surrender of a Hessian regiment. On 26 June 1777, at Matouchin (now called Metuchen), he awaited an attack, contrary to Washington’s orders. His position was turned and his division defeated, losing two guns and 150 men in the Battle of Short Hills. Subsequent battles at Brandywine, Germantown and Monmouth cemented his reputation for bravery and sound tactical judgment. At the battles of Brandywine and Germantown he acted with bravery and discretion. At the battle of Monmouth he displayed tactical judgment in posting his batteries, and repelled with heavy loss an attempt to turn his flank. During the encampment at Valley Forge in late-1777 and early-1778, his headquarters was at the Maj. Gen. Lord Stirling Quarters. In January 1780, he led an ineffective raid against Staten Island. Lord Stirling also played a part in exposing the Conway Cabal, a conspiracy of disaffected officers looking to remove Washington as Commander-in Chief and replace him with General Horatio Gates.

When Washington took his army south in 1781, he appointed Stirling commander of the northern army and he was sent to Albany. Stirling, always a heavy drinker, was in poor health by this time, suffering from severe gout and rheumatism. He died in Albany on 15 January 1783. His untimely death just months before the official end of the war is the probable reason that he is not as well known today as many of the other generals. Still, his significant contributions made him one of the most important figures of the American Revolution. He was buried at Trinity Churchyard, New York City.

* His nephew was Senator John Rutherfurd (1760–1840).
* His son-in-law was Congressman William Duer (1747–1799).
* His grandson was College president William Alexander Duer (1780–1858).
* His great-grandson was Congressman William Duer (1805–1879).
* His great-grandson was General Stephen Watts Kearny (1794–1848)
* His great-great-grandson was General Philip Kearny, Jr. who died in action during the Civil War
* MS51, a Middle School on the former Gowanus battlefield, is named William Alexander Middle School for him.
* Stirling, New Jersey, an unincorporated community in Long Hill Township is located a short distance from Alexander’s house in Basking Ridge.
* The Lord Stirling School in New Brunswick, New Jersey is named for him.
* Lord Stirling Park in Basking Ridge, New Jersey is located on part of his estate.
* Sterling Hill Mine was named after him, as he once owned the property
* Lord Stirling 1770s Festival
* The town of Sterling, Massachusetts was named in his honor.