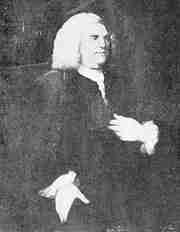 William Allen (August 5, 1704 – September 6, 1780) was a wealthy merchant, attorney and Chief Justice of the Province of Pennsylvania, and mayor of Philadelphia during the colonial period. At the time of the American Revolution, Allen was one of the wealthiest and most powerful men in Philadelphia. A Loyalist, Allen agreed that the colonies should seek to redress their grievances with British Parliament through constitutional means, and he disapproved of the movement toward independence.

He built a manor and country estate, known as Mount Airy, in 1750 outside Philadelphia; the neighborhood became known by his estate’s name and is now part of the city. In 1762 he founded what became Allentown, Pennsylvania, and had a hunting lodge there.

Born in Philadelphia in 1704, Allen was the son of William Allen, Sr., a successful Philadelphia merchant of Scots-Irish descent, who had immigrated to America from Dungannon, County Tyrone, Ireland with his brother John and father. The elder Allen had risen to prominence through close ties to William Penn, the proprietor of Pennsylvania.

As a youth, Allen spent much of his time in England for his education and refinement. In 1720, he was admitted to the Middle Temple in London to study law, and at the same time became a pensioner at Clare College, Cambridge.

Upon his father’s death in 1725, Allen returned to Philadelphia to manage the family’s business interests. In the spring of 1729, Allen was named alongside lawyer Andrew Hamilton (his future father-in-law) as a trustee for the purchase and building fund to develop the state house in Philadelphia, then the capital of the province. Both men were authorized to buy the land for the project. By October of 1730, the next year, Allen and Hamilton began to purchase lots on Chestnut Street at their own expense, the property on which the Pennsylvania State House (later known as Independence Hall), was to be built. In 1735, Allen was appointed as mayor of the city of Philadelphia. The next year, he celebrated the opening of the nearly complete State House by having a feast for all residents and guests of the city; it was described at the time as “the most grand, the most elegant entertainment that has been made in these parts of America.”

By the will of his father-in-law Andrew Hamilton, dated July 31 – August 1, 1741, Allen inherited all the land of the Yard for the state house and its surrounding public grounds. They were to be managed by him and his brother-in-law James Hamilton. On September 13, 1761 Allen and Hamilton conveyed Lot no. 1 and the other pieces of land acquired to Isaac Norris II and the other trustees of the province. This completed the Yard: the site of the state house and its surrounding public space.

Allen was appointed as a Chief Justice of the colony’s Supreme Court, serving from 1750 to 1774. He resigned due to increasing tensions resulting from his Loyalist beliefs and health concerns. He was succeeded by Benjamin Chew.

In 1760, encouraged by William Smith, Allen had sponsored the young painter Benjamin West’s trip to Italy. He established a £100 line of credit for West and, in a letter of introduction in 1760, called him “a young ingenious Painter of this City, who is desirous to improve himself in that Science, by visiting Florence & Rome.” A year later Allen and his brother-in-law, the Governor James Hamilton, provided more money for West. He developed as one of the century’s most important painters and, from 1792 until his death in 1820, served as the president of Britain’s Royal Academy. West referred to Allen as “the principal of my patrons.”

A Loyalist, Allen went in 1774 to England, where he published The American Crisis: A Letter, Addressed by Permission of the Earl Gower, Lord President of the Council, on the present alarming Disturbances in the Colonies, which proposed a plan for restoring the American colonies to Crown rule. He stayed there throughout most of the American Revolution, not returning to Philadelphia until 1779, after the British Army had evacuated. He died at Mount Airy, his mansion outside Philadelphia, the following year, before the end of the war in 1781.

On February 16, 1734, Allen married Margaret Hamilton, daughter of Andrew Hamilton, famed defense lawyer in the 1735 Zenger case, and sister of James Hamilton. William and Margaret had six children: John, Andrew, James, William, Anne, and Margaret. Like their father, Allen’s sons were Loyalists in the American Revolution.

Anne Allen married John Penn, a proprietor of the province with a one-fourth interest, who served as the last colonial governor of Pennsylvania. She lived with him for a time in exile in New Jersey during the British occupation of Philadelphia, but they returned to the city in 1788 and lived the remainder of their lives near there.

In 1762, Allen laid out the plan of present-day Allentown, Pennsylvania, which he then called Northampton Town. The property was part of a {convert|5000|acre|km2|sing=on} plot which Allen had purchased in 1735 from his business partner Joseph Turner. He had bought it from Thomas Penn, a son of William Penn. Allen hoped that Northampton Town would displace Easton as the seat of Northampton County and also become a commercial center, due to its location along the Lehigh River and its proximity to Philadelphia.

Allen gave the property to his son James in 1767. Three years later, in 1770, James built a summer residence, Trout Hall, in the new town, near the site of his father’s former hunting lodge.

On March 18, 1811, the town was formally incorporated as a borough. On March 6, 1812, Lehigh County was formed from the western half of Northampton County, and Northampton Town was selected as the county seat. The town was officially renamed “Allentown” in 1838 after years of popular usage. It was formally incorporated as a city on March 12, 1867. Today, Allentown is the third largest city in Pennsylvania.

Allen built a mansion and country estate, called Mount Airy, on Germantown Avenue in 1750. The area eventually took the estate’s name, Mount Airy, as its own. The estate stood on what is today the campus of the Lutheran Theological Seminary at Philadelphia.