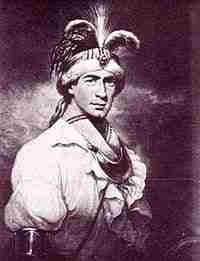 William Augustus Bowles (1763–1805), also known as Estajoca, was a Maryland-born English adventurer and organizer of Native American attempts to create their own state outside of Euro-American control.

Some sources give his date of birth as 1764. Bowles was born in Frederick County, Maryland, and joined the British Army at the age of 13.

Bowles was still just a boy when the events of 1776 triggered the American Revolution. He served as an ensign with the Maryland Loyalist Battalion, travelling with the battalion when it was ordered to form part of the garrison of Pensacola. Upon arrival, and as he was an officer, Bowles resigned his commission, and left the fortifications. He was captured by Indians from the Creek Nation.

While he was living with the Creek Tribe, Spanish naval forces with soldiers embarked upon their ships, and began to attack British forts along the Gulf Coast. Bowles convinced the Creeks to support the British garrison of Pensacola against the Spaniards, but the garrison fell when its powder magazine was hit by artillery fire from the Spanish ships. The survivors of the garrison were captured, but Bowles escaped into the wilderness with his Creek allies. This occurred May 9, 1781, when Bowles was either 16 or 17 years old.

After this battle, he was reinstated in the British Army, and went to the Bahamas. After a few months in the Bahamas, the British governor Lord Dunmore, sent Bowles back among the Creeks with a charge to establish a trading house among them. Bowles established a trading post along the Chattahoochee River. He would marry two wives, one Cherokee and the other a daughter of the Hitchiti Muscogee chieftain, William Perryman, and used this union as the basis for his claim to exert political influence among the Creeks, later styling himself “Director General of the Muskogee Nation”.

Pursuing his idea of an American Indian state after the end of the Revolutionary War, he was received by George III as ‘Chief of the Embassy for Creek and Cherokee Nations’ and it was with British backing that he returned to Florida.

In 1795, along with the Seminoles, he formed a short-lived state in northern Florida known as the “State of Muskogee”, with himself as its “Director General”, and in 1800, declared war on Spain. Bowles operated two schooners and boasted of a force of 400 frontiersmen, former slaves, and warriors.

A furious Spain offered $6,000 and 1,500 kegs of rum for his capture, and when he finally was captured, he was transported to Madrid where he was unmoved by Charles IV of Spain’s attempts to make him change sides. He then escaped, commandeering a ship and returning to the Gulf of Mexico. One of the main victims of his piracy was the trading firm of Panton, Leslie & Company.

In 1803, not long after having declared himself ‘Chief of all Indians present’ at a trial council, he was betrayed and turned over to the Spanish and died two years later at Castillo Morro in Havana, Cuba, having refused to eat.